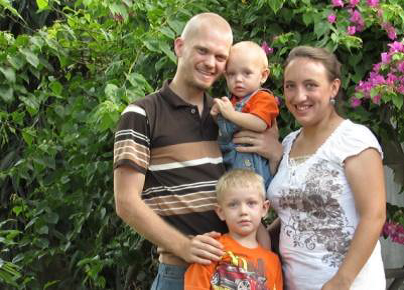 Sasch and Charissa’s first three weeks were spent in Manado. Thankfully their visa was renewed without any issues and they also were blessed to spend time with their co-workers and other friends there. During this time they also found out that they are going to be adding to their family in Feb 2016! Of course this means that Sasch and Charissa plans changed yet again, and they will be extending their home assignment for an extra month or so. The last week of June they travelled to another city on the same island to attend a conference. It was a pleasant week in which they were able to spend time with several friends from their time in training. Additionally they were inspired by seeing and worshipping with fellow believers and co-workers, many of which come from remote areas and 30-40 years ago had no chance of hearing the gospel.
At the beginning of July, they went to the USA for six weeks. A special highlight was meeting their new nephew and niece and also the opportunity to share about their ministry in a couple of the local churches.
Settling in Germany finally brought to an end their semi-nomadic lifestyle. Sasch and Charissa have now been in Germany for nearly two months and have been greatly blessed by many friends, who provided their apartment, a car, furniture, and even a bicycle for Ruben!
They have had fun visiting and catching up with family, friends, and church family after more than three years absence. They’ve also had many opportunities both privately and in their home church to share about their work. Please pray that Sasch and Charissa will continue to find opportunities to share.
Sasch is involved with their church leadership group and is leading a practical Bible study workshop every other week. Sasch and Charissa are enjoying being part of a home group. Charissa and the boys attend the church’s playgroup once a week. Ruben has made great strides both socially and in his language ability. From speaking only English when they arrived, he is now quite conversant in German (at least on a playground level!). He has also come out of his shell and spends large portions of his days outside on his bike and playing with friends. Recently he stayed in Sunday school all by himself for the first time.
Judah is growing up and developing more and more independence. He absolutely knows what he wants and lets you know! He also has become his brother’s copycat to the best of his ability.
Sasch and Charissa need to get back to Indonesia as soon as possible after the birth of their third child in order to not have any issues in renewing their visas.
After their home assignment Sasch and Charissa will be heading to Buru as quickly as possible. There they will begin again the process of learning a new language and culture and building new relationships. In preparation for building their house there, Sasch and Charissa have already asked co-workers to help oversee the cutting of wood in the hopes that it will be dry and ready to use by the time they get there.
Please pray for the work in Buru. The church is still very small and the believers are still young in their faith. Additionally there is only a very limited portion of scripture in their language. Please pray that the believers will develop a hunger for God’s work, and that some of the men will strive for maturity, so that at some point they will be able to take on leadership of the church. Also pray that Sasch and Charissa’s co-workers stay encouraged and that the ministry will truly have an impact in changing the lives of the Buru people for good.