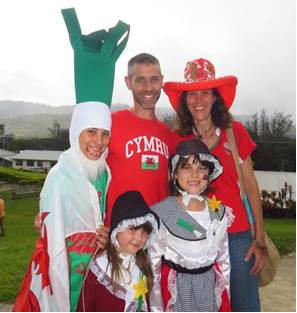 Recently Dan and five of the North Wahgi believers went to a believers’ conference in the next province from Monday to Friday. There were about 130 people there from five different church plants started by New Tribes missionaries. Four of these church plants now have no missionaries but continue to grow in their faith and dependence on the Lord Jesus. The five believers that Dan took from the village in North Wahgi were thrilled to hear the stories and testimonies of God’s children at the conference. It struck them how these people are now standing on their own two feet and pushing ahead with outreaches and building each other up.
During the conference, Dan spoke from the Epistle of James and challenged the folks there to allow God to help them grow in their faith and in their obedience to His will. The other speaker was a PNG national who has been a missionary in the Highlands for a number of years and he spoke about God’s amazing grace down through history.
The North Wahgi believers came back from the conference really excited and eager to put into practice the things they had heard. The downside was that many of the believers were not able to go because of lack of funds. They have a hard time saving for things and tend to spend money as they get it. The missionary team are encouraging them to put some money aside every week so that they will have enough to go to the next conference. Pray that they will see the importance of saving and will set money aside so that they can go and enjoy the wonderful fellowship with God’s people in the next province.
Sadly a long term helper and friend has been persistently drunk and going around with his old buddies. He is upset at some of the believers because they criticised him for his actions and has vowed not to come back to join with the other believers. Pray for wisdom for the team and that he will by God’s grace be restored to fellowship with the Lord and His people.
A couple of months ago a new literacy course was started with about 17 students. The numbers have now dwindled down to six people. It seems that Highlanders find it really hard to commit to something long term, hence the low numbers. Pray that those who are left will see the benefit of learning to read and will faithfully come to the classes and not give up.
Dan and Rachel are pleased that Dan’s Romans translation check went well in March. Dan and one of his translation helpers travelled to Goroka to meet Dave Brunn, one of NTM’s translation consultants. They went through the epistle in three days, carefully checking that the meaning was coming across well. Apart from a few minor changes, Dave said that he thought Dan had done a good job of translating a difficult book, for which they praise God! The missionary team have had several copies of translated Scriptures printed out and have given a copy to each of their helpers. These include Old Testament portions, Mark’s Gospel, Acts, Romans and Ephesians. On one side of the page is the Pidgin English translation and on the other side, the North Wahgi translation. They are thrilled to be receiving God’s Word in their own language. Their co-worker Levi has just finished translating 1 Corinthians, although it has not been checked by a consultant yet, and Dan has drafted 1 Timothy, Titus and 1 Thessalonians.
While Dan was having his check, Ben, Georgia and Rebekah got to attend the mission school for a week. This was a great experience for them and a good time making new friends and linking again with old ones. The girls also got haircuts while at the base and they all had check-ups with the mission doctor. Rachel got work on her neck so she can be fighting fit for their next stint in the village. Dan and Rachel are thankful for the support missionaries using their skills to bless others.
Rebekah has completed her reading course and was very excited to receive a real Bible as her prize, complete with cupcake cover! She reads a memory verse from it every night and loves to use it for ‘sword drill’ during the Sunday kids’ club. Pray that she will always be this excited about God’s Word.
After the translation check they enjoyed a week’s break at a beautiful mission base near Goroka. They spent the time relaxing by the pool, feeding the tree kangaroo and baby rabbits, playing mini golf, going for some lovely walks round the property, tubing down the river and curling up by log fires in the evening singing praise to God.
Dan and Rachel’s o-workers Levi and Robyn Lenz and family are leaving for the USA in a couple of weeks’ time for their home assignment. Robyn’s pregnancy is going well and a recent scan showed a heathy child. They are planning to be back in the USA for a year. Pray for them as they pack up, say goodbye and adjust to life back in their home country.