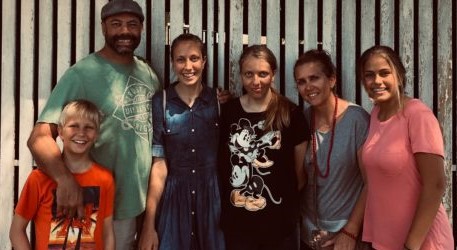 When Lourens Laureti and family, missionaries among the Mengen people of Papua New Guinea, returned to South Africa on home assignment in October they felt like wounded soldiers.

Lourens says, “You would think that after six years as a full time youth worker, then four years as a full time missionary support worker in South Africa and now twelve years in PNG as church planter that we have the hang of it. Nope, the Christian life and serving on the mission field is war. And the older I am getting and the longer I serve the amazing King, the more fierce the battle gets.”

Arriving at the airport in South Africa, Lourens felt that they could not have left PNG at a worse time! Many new wonderful things were happening in the Mengen church, and he felt like a dad not being around when his son plays his first rugby game! Not to mention all the hard things happening in the church, the field, and at the centre. Yes, that is the battle just there, worrying unnecessarily about a work only God has done and will complete!

These were just some of Lourens thoughts. Pray for them as they work through this time and as they get their wounds checked out and as they learn more what it means to trust their wonderful Heavenly Father who loves them limitlessly and unconditionally, and that they do not have to hurt themselves with worry!

Up to now, they have had a fantastic time at home. Their family and supporters have been wonderful. They feel they are getting the opportunity to rest, refocus, reconnect and ultimately be restored so that they can go back and continue with what God has for them.

They have also been helping Madeleen (their eldest daughter who has autism) to settle at a village community that works with intellectually challenged adults.