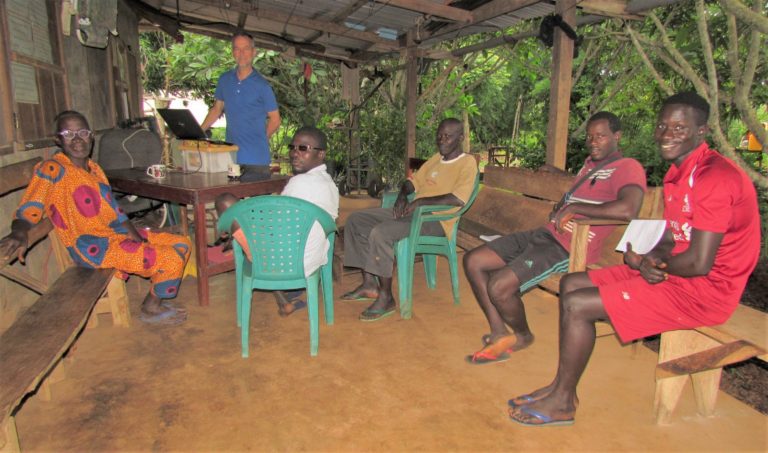 The heart of man plans his way, but the LORD directs his steps. Proverbs 16:9

At the beginning of this year Kirk and Yolanda Rogers’s plan was to remain in Guinea for eighteen-months or so before returning to the USA for their home assignment. They were making good progress in Bible translation and other aspects of their church planting work, and had no thought of interrupting their momentum.

Then Kirk’s niece contacted them inviting them to attend her March wedding in Missouri, and asked Kirk to officiate. It was a tempting thought, but they were not sure it was something they should do.

As Kirk and Yolanda began to see the Lord provide the needed finances for this trip, and since it would be a good opportunity for Yolanda to visit her ailing father, they decided a few weeks in the USA would be possible and even a good idea.

They arrived in Missouri in late February. However, before they were scheduled to return the COVID-19 ‘lockdowns’ began. Now they may not be able to return to Guinea until September or later.

They had a plan in mind, but they realise the Lord is doing what he always does: directing their steps to reshape their plan according to His will.”

They have been kept busy. The wedding became a small, mostly family-only affair as the lockdown descended, but it was good nonetheless! They have also enjoyed time with family and friends, worked on their house, and experienced springtime in Missouri.

Kirk has had the opportunity to work on Bible translation, but he is limited in what he can do, not having regular access to their translation team or other mother tongue speakers of Landuma (there is no Internet service in the vicinity of their village in Guinea). Their co-worker, Dan, in Colorado, is also working on translation. And Kirk has been getting some books of previously translated Landuma Scripture printed to take back to Guinea when they return.

The break expected to last just a few weeks has stretched into several months, and has morphed into an early home assignment, which likely means they will not be returning to the States next year. (However, that would be their plan!) They look forward to returning to Landuma land, whenever the Lord directs, to continue the church planting work there.

Please PRAY that Kirk can make good progress on the church planting projects he is working on.

PRAY for the church in the Landuma area, that in spite of restrictions forbidding religious meetings, the believers would still make opportunities to fellowship, study the Word, and pray together.

PRAY that Guinea’s borders would open soon so Kirk and Yolanda can return to the work that God has called them to do.