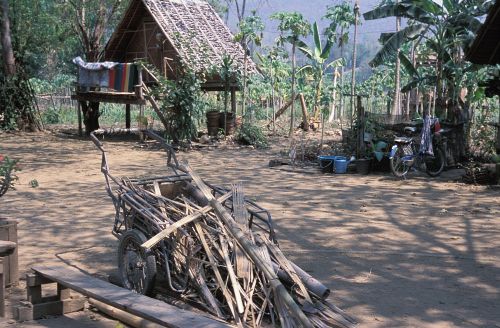 Richard and Wendy have been involved with a number of community projects. These projects are a great way of making friendships in the community, showing God’s love in very practical ways and they help them to be able to relate to people on a more equal status and not as the “religious teachers” that most people would automatically tend to see them as.

However, it remains a struggle to figure out practical ways to help people that are beneficial and accepted by the people. Please pray Richard and Wendy would have wisdom in developing projects that would not just benefit those who need help but would tie in and benefit the other aspects of church planting that they are involved in.

Recently on a journey, whilst waiting for the rain to let up, they got talking to some folk from the small city near where they live. One man was an agriculture teacher at the local high school and two others were involved with agriculture projects as well. Richard and Wendy got to talking about raising crickets for eating and growing mushrooms. They ended up making plans to meet up the following week to visit a local cricket farm. The high school teacher also invited them to sit in on a class on growing mushrooms. Richard and Wendy are still trying to figure out if these projects would benefit the folk in the village where they live. It has been good for them to develop friendships with these people. Wendy has also had a cooking class with some ladies in the village and Richard has been helping some high school students with their English.

Wendy’s mother Gwen Pierce spent most of the hot season with Wendy’s Aunt Betty in an area known for being hot but this year it wasn’t too bad. Gwen is now back with them until around the end of April, but she was suffering from back pains. She has been diagnosed with osteoporosis and has two collapsed vertebrae. She would appreciate prayer as she learns to manage the pain and the family work together to figure out her future plans.

Richard and Wendy are currently ‘on the road’ as they had some business that they needed to take care of back where they used to live, so they took the opportunity to go back and visit the believers and their friends there. It has been good for them to catch up with them after being away for almost a year. They have also visited Chiang Mai and the kids have been able to take achievement tests to see how they are doing in their studies. Richard will be meeting with the folks from SIL to work on developing a keyboard for typing the Pwo Karen script that they have been learning. Pray for them in their travels and all the things that they need to get done. They plan to get home early next month.

Thank you for your praying.