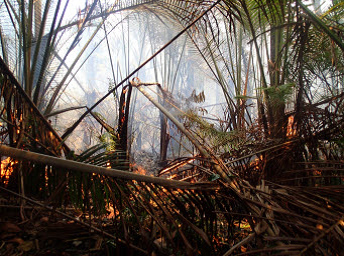 André and Aurélie are back in the village after having spent some time in Madang and in Goroka. They had a good missionary conference in Goroka where they could meet other missionaries who are working in the same region. God is at work in many places in PNG.
The dry season has turned to a drought all over the country. In their area it has been very dry too and the crops are dying. It is a problem for the people as food is getting scarce. They also have to walk further and further into the jungle to find water for drinking and washing. Recently there has been a big cloud of smoke above the forest due to a fire that has been spreading through the dry bushes for several days. Then the wind started to blow and the fire increased. The people gathered to fight the fire which is spreading rapidly because of the drought. The wind blew some hot ashes towards the houses and a fire started only 40 feet from André and Aurélie’s house. They are thankful the fire did not reach their house or their “haus win” that has a thatched roof.
The people are keeping a close eye on the fire; their houses all have thatched roofs so a fire could spread very quickly through the village. Please pray for rain! The dry sago palms burn easily.
André and Aurélie’s new co-workers, the Callahans, have returned from the USA with their three children. A work team is finishing their house at the moment. If it rains and their tank gets water, they will be able to move in. Please pray for them as they are getting ready to move in!
The last couple of weeks André and Aurélie have been testing a trial alphabet with the people. Some of the people are literate in Pidgin so they asked them to sit with them and discuss the suggested alphabet. It was a greatly encouraging moment as the people were discovering how to read and write their language and eventually read short stories. They gave André and Aurélie valuable input and they are hoping that this version of the alphabet will be the final one. It was fun for André and Aurélie to see them take notes in their notebooks so that they could take them back home to learn there. Soon, these people will be able to read, write stories and later on, read God’s Word in their language!
There is still a lot of work to do before starting literacy. The team still have a lot of grammar and culture papers to finish first.
It is so hot in the village at the moment! Pray the missionary families, it is hard to work efficiently when the heat is so high. But the drought is good for finding crocodiles – they don’t have any more water to go and hide in!!