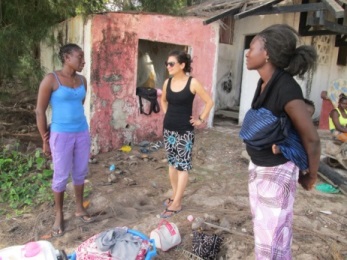 Michaela is now in Phase 4 of language study; this means she has completed a third of the French and culture study in Dakar. The language manual says that this will be the most challenging phase so she would appreciate prayer.
When Michaela’s language helper was on holiday she was able to join the youth week at her church. It was quite a challenge with her language abilities, but looking back it was helpful for building up relationships with her host church. At the end of the week, they had a national day at church, since there were a lot of students from many different West African countries; they had a very big variety of interesting cultural presentations. Michaela was the only German. When it came to prepare for the national day, she was asked what she was good at: singing, dancing, theatre or poems. As she couldn´t see herself doing any of those things she told them she would make a presentation and bake something traditional…and she got away with that. It went really well and her host sister became German for the day and helped her with the baking and presenting! Michaela was able to attend the Haerter family’s goodbye party which their church organised for them. It was so nice for her to see how the new church showed their appreciation towards them, in speeches, gifts, preparing food and a fun programme for the kids who were easy going and Michaela tried to communicate with her little French and was encouraged by having some good conversations. Pray for the Haerters as they left Senegal this summer to go to back to Germany.
After Michaela’s apartment was flooded twice, she decided it might be a good time to move…Her host family had an extra room to rent out and so Michaela has moved to live with them and it is proving to be a good way to learn more about Senegalese culture.
One case of Ebola was recorded in Senegal, pray that it would not spread.