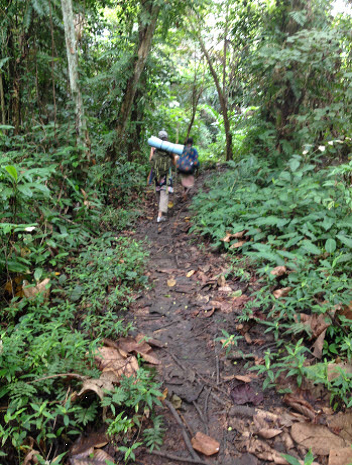 The older lady was the only elderly person in the village to know the Lord. Praise the Lord! The other believers (three men and several women who are bilingual and have heard the Gospel in another tribe) organised the funeral, so it was very quiet and simple, contrasting with typical PNG funerals where people wail very loudly.

The death of this believer raised many questions in the minds of the people. They asked the missionaries: “she had heard the “good talk”, so, why did she die?” They have a very animistic view of death, and they think an evil spirit may have killed her. “Why her? She was a good person!” “Where is she now?”  Some people think about other recently departed relatives and wonder where they are. Others tell them they are afraid to die. It has made people think. They want to hear the truth!

Before the lady died, André and Aurélie often sat down with her. They had never seen death from that close before. She was so miserable, lying on the floor, unable to eat, wash, sit or even to chase the flies flying around her. Her family patiently took care of her. At night, people would gather to watch her; it was an opportunity for André and Aurélie to sit with them and show them that they cared. All her belongings fitted in only four bags, but the ladies said “she had a lot of stuff, four bags!!”

Aurélie was able to experience a bit more of the daily lives of the village women. She went to the lake with a group of ladies, several hours hike from the village. They slept by the lake and came back the next day. It was a good opportunity to spend time with the women. They caught hundreds of fish (it is the best season for fishing) and then they smoked them over the fire to preserve them.  Aurélie ate with the people: boiled fish for dinner, roasted yam for breakfast.

André spent some time with the men too. He went for a short trip to visit several other villages. They want to show people in other villages that the missionary team has also come to share with any village that is interested in the Word of God.

In two weeks’ time André and Aurélie are going to have their second language evaluation. They hope that they will be allowed to start writing the linguistic write ups (phonology and grammar) but this will depend on the result. After the evaluation they plan to fly to Australia! They will take a two week family break and will meet two friends from their church there. André and Aurélie can’t wait! They will fly back to the village with their friends so that they can experience tribal life.