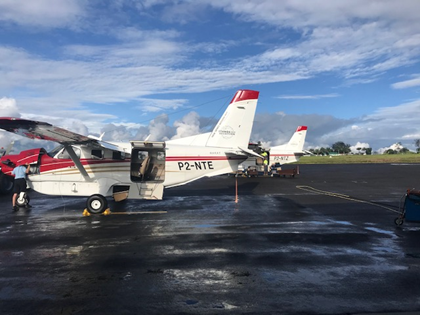 Last week, Koen and Anne-Laure Verdonck’s son Josh, a mission pilot, returned from Australia with the mission’s plane loaded with eighteen boxes of Bibles, printed in Pidgin English – one of the main languages in PNG. These Bibles will be used for teaching. The Bible was translated into Pidgin many years ago and now it has been translated into easy English.

Currently there are thirty teams working on the translation of the NT in their “tokples”, their tribal language. Ninety percent of those translations are being used in the churches.

Currently there is only one language consultant for PNG and it is not enough.  A consultant works closely with a tribal team in the translating of the Bible. They have ways of finding how well the translation communicates and how to make improvements. The sad thing is that teams have to wait far too long for their turn. This is a spiritual battle as it means that the translations take a long time to get into the hands of the believers. They are now working on preparing Papua New Guineans to become language consultants.

Koen has been working hard with managing the aviation side of the mission work in PNG.

The helicopter programme has now started. Their son Josh was asked to take the helicopter training. Pray for the financial side for that training and for the additional missions training too. This means that Josh and Erin will be going to the USA for two years. They will be greatly missed by Koen and Anne-Laure especially granddaughter little Lucy Mae.

The Dentist has arrived back in PNG and so on the 4th March, work started again for Anne-Laure as a dental assistant. It looks like there are going to be some outreaches into tribal area’s with the dental team.

Koen and Anne-Laure were invited to do two debriefs recently with a young couple with three little kids from a different missions organisation. A debrief is a meeting where people who have experienced a trauma get a chance to talk about what they experienced. It is not a counselling session but a kind of ‘initial help’.

Thank you for being a part of the team building churches in Papua New Guinea. Your prayers are of great value.