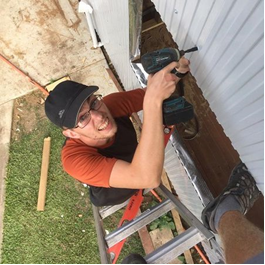 Chris and Ingrid Hughes with Jonathan are finally settling into a routine in Wewak. They are pleased to have the chance to be a part of the support network there and to learn skills that will be useful for when they move into the tribe. Pray for God to provide co-workers and for patience as they wait for them.

Ingrid is working in the finance office and she loves it. You would expect this kind of work to look similar week in week out – not in PNG. She never really knows what’s coming each week and consistently needs to troubleshoot. Chris is part of a team building a new house on centre so that he will be more able to help build and maintain their bush house in the tribe.

Chris is learning how to use the tools, the names of house parts and the framing and building process. He is not a practical guy and does not naturally enjoy this sort of work – but he says it is good for his pride and for learning new skills to do something he is rubbish at. Thankfully, with practice and patient teachers he is improving. He will be much more able to maintain their house in the bush after having been a part of this project. In all honesty they would love to be ready to move into a tribe right away, but first they need a team and so they are learning to be content where God has them and to wait for His timing. Praise God for providing meaningful work and the strength to do it.

Life in PNG has its hard parts – but now that they are settling into a routine, they are really enjoying their time there. They like the warm humid climate and being close to a beautiful beach. When they are tired after a week of house building and troubleshooting, their favourite thing as a family is to go to the beach and swim, surf and dig holes in the sand with Jonathan. He is learning more and more words and now he can say some words in three different languages. He’s at the point where he enjoys helping mum and dad out with little jobs like setting the table or putting daddy’s shoes where they belong once he gets back from work. They enjoy spending time with the other families who are waiting to allocate in a tribe and Jonathan loves playing with the other toddlers. Having a friend in for a play date is one of his favourite things.

Recently, Chris was able to go on a survey to two people groups. Along with four guys, Chris hiked through village after village for four days, meeting with the communities to speak about what NTM does and to see whether there is a need for missionaries in either people group. He put his linguistics training to use and gathered language data to figure out the strength of the languages and how many dialects exist within each one. They checked if people could understand the national language, whether there were other missions working in either place and whether they knew how to get to Heaven. Their hearts were broken again and again as no one was able to give a clear explanation of the way to be saved and they instead depended on their own works or following rituals to please whatever gods may exist. Folks there were confused and they need the Gospel. A report is being put together which will be available to new missionaries looking for places to allocate. Both people groups need missionaries – please pray that whether it is Chris and Ingrid or another team, God will send missionaries to both places. Pray for contentment as they wait to move in to the bush.

Chris and Ingrid are so grateful for your prayers.