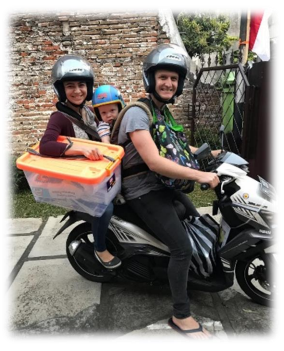 Andrew’s trip to an NTM regional conference was well worth it. He met many of the 170 who were attending. He heard many stories of how missionaries struggle and how works are hindered. He also heard stories of how dear tribal people’s lives have been changed and how they are living their lives for God despite hardships. Andrew was shocked to hear from leadership that if 100 missionaries moved to that area of Asia-Pacific tomorrow – they would have places to put them all. Joanna and Manoah did not accompany Andrew on this trip but held the fort back home on a different island.

Andrew unfortunately missed his flight on the way back. With an extra five hours in the airport until the next available flight, he had time to ponder prayerfully what region God would have their family serve. Every region has big needs but they both have heavy hearts for one region in particular.

It is home to over 18 million people and is home to the mission’s main national training centre for Asia-Pacific. They are awaiting confirmation from leadership about their decision and could be heading that direction next year. It would mean at least another year and half of national language learning. This further time of language study would help them to determine which one of the specific ministries God has for them.

During October, Andrew and Joanna are having missionary kid care classes. Manoah continues to do well and even though he is still very young, they want to get equipped with possible home-schooling principles early. Pray that these classes are beneficial.

They will be travelling to Germany as a family in September as Joanna’s younger brother is getting married. They will be in Germany for three weeks. While back in Germany they plan to attend their German churches weekend-away and will have the chance to share about what God is doing in Asia-Pacific. They are also looking forward to Andrew’s family visiting them for a few days while they are there. Pray for safe flights to-and-fro from Germany, strength to cope with time difference and climate and that it may be a time that they can bless and challenge the church.

Andrew and Joanna are so thankful for people’s continued prayer and support.