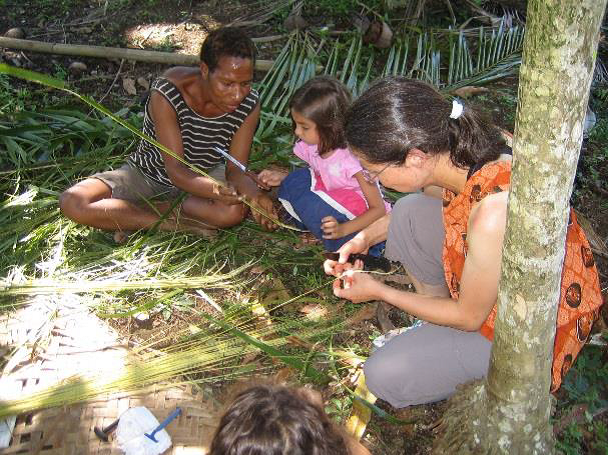 Meanwhile Miriam has settled into life in PNG quite well and is thankful that the Lord wants her to be there. She has discovered that the best thing to do is to spend as much time as possible with the nationals. It helps her to learn Pidgin but also it helps her to understand why they act like they do. Miriam recognises how skilled they are just to live with the stuff that’s available around them. They are very happy to help the new missionaries learn the language.
For the first six months Miriam has a time of orientation with some other new missionaries. During this time they learn the national language, which is Pidgin, and then they study the culture of the nationals who are living out in the bush around the NTM base. It’s important for them to be able to speak Pidgin so they can function in towns and cities, interact with government officials and with national co-workers. It can be a real help when learning a vernacular language later on as Pidgin can act as a bridge to learning the language of a people group quicker. In some languages there are no alphabet, dictionary or grammar books so the missionaries have to learn from scratch.
During this orientation time the new missionaries also get other useful information about the structure of NTM Papua New Guinea, how to teach a new-born church in order that they can mature and become independent etc.
At the end of November Miriam will go to Lapilo, where she will stay for two weeks before finishing her orientation time with several weeks of bush orientation, living in the tribe with an existing work.
Employment regulations are changing in Germany. Pray that Miriam learns to trust the Lord for all her needs including financial needs.
At the end of January Miriam plans to work for six months on an NTM base giving her the opportunity to get to know some other NTM co-workers and maybe find some friends that she might work with in the bush at a later date.