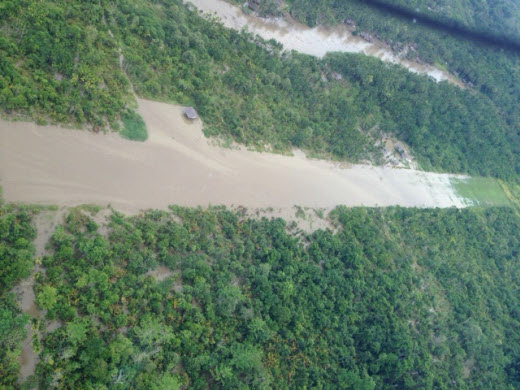 The three families had good discussions and are excited at the prospect of the Callahans joining the team! They saw the hand of God in it all and they are thankful for his guidance. Seth and Rochelle Callahan have two children, Emmanuel and Tucker and they are expecting a third child this summer. Rochelle is a missionary kid from Guinea (Africa) and she speaks a bit of French! The Callahans will go back to the USA for the birth of their child and are hoping to join the team by the end of the year. With another family joining them, the team are now dealing with the logistics of having a third house built in the village. The Callahans will probably visit the village in the coming weeks to mill wood and maybe start working on their house. Pray for them!
Before going to Goroka, André and Aurélie had their first language evaluation. It went well and they are encouraged by the progress. As they look back they realise that God gave them the strength for daily language learning. It is God’s work, not theirs!
The local airstrip is under water which makes the team more dependent on the helicopter during this rainy season.
Now, André and Aurélie are back to the routine of culture and language learning. As time goes on, they get to know the people deeper. Recently André was speaking with some men and they told him: “You, white men, you know why people get sick. We don’t know. So when someone is sick we have to find a reason for the sickness; someone must have done something wrong that caused the sickness”.
The village people live in darkness. Another example of tribal beliefs is that after a child is born, they wrap the baby, put him down and don’t attend to him. Then the women who helped with the childbirth quickly start washing their hands and their legs. They say, “If we don’t wash, we will be sick! We will also go to the bush and get a plant to make that special drink before the morning; otherwise we will get older faster!” The missionary team are waiting for the day when they will be able to explain to the people in the village the real cause of death, sickness and suffering, tell them about the perfect justice of God and explain about his grace for sinners!