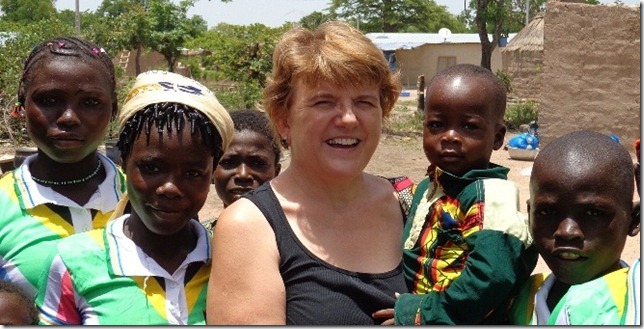 Paul and Marina had a very encouraging time in their village in Ivory Coast during the first half of this year.
Highlights include a successful Christian ladies conference; the completion of a series of studies in the book of Ephesians in which Loron Bible teachers participated in developing the lessons; new opportunities for outreach into Loron villages with the gospel; and two more teenage Loron girls completing the literacy course. Both of these girls have already become eagerly engaged in helping to teach others how to read and write.
A major and exciting step forward in the Bible translation project was the decision by Loron believers from around twenty different fellowships to commit themselves to become more engaged in helping to finance and staff a Bible translation team to complete the New Testament in the Loron language, and also begin work on the Old Testament. It has thrilled Paul and Marina’s hearts to see their enthusiasm and dedication.
In early June they travelled to Burkina to visit missionaries working in three different locations there. They were impressed with their perseverance and zeal, and their desire to be a witness and testimony to those around them. Please pray as the work of NTM continues to expand in western Burkina. A number of unevangelised people groups have been identified with whom NTM would like to begin working.
Paul and Marina returned to West Africa earlier this month. They are hoping to get a new vehicle for the work. Their Mazda pickup is now over twelve years old and has done a lot of hard driving over rough roads, especially during the past eight years. The pickup has served them well, but they live many miles from a good mechanic and cover quite long distances, and the minor problems that they have begun to experience can quickly develop into major ones, so they feel the need to get a newer, more reliable vehicle. They’d appreciate your prayers as they look for new wheels.
A number of things are planned for the second half of the year including some more travelling to different parts of Africa. Marina will, DV, be participating in a literacy seminar in October for NTM missionaries who work in southeast Africa, and Paul will be visiting some of the NTM works in Senegal and possibly Guinea. The remainder of the time will be spent with the Loron folks in Ivory Coast.
The Loron believers have chosen a name for their fellowship of churches. They are the original Christians in the area but there are now a number of other church groups that have come into the region, and so to clarify who they are, they will be calling themselves Grace Evangelical Churches of Ivory Coast. An appropriate description of what they believe and teach.
Continue to pray for Paul and Marina as they work among the Loron people and as they engage in ministries with NTM missionaries in West Africa.