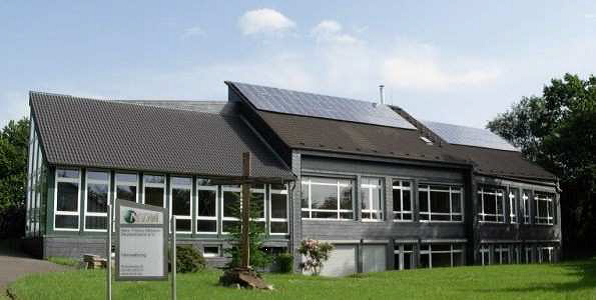 After leaving PNG Ben and Wina with Noah spent two weeks in Omaha, USA with Ben’s family, they then returned to Germany where they have been ever since, living in an upstairs apartment in Wina’s parents’ house.
Ben and Wina are excited about this opportunity to join the staff at the mission headquarters! It seems like a second chance from the Lord. They can continue to be involved full-time with NTM in the work of spreading the Gospel “to the ends of the earth” – albeit, somewhat behind the scenes, enabling and supporting others to stay on the front lines.
The NTM headquarters in Germany is located in Hückeswagen which is about a 50 minute drive from where they live at the moment (that’s without traffic – during rush hour that drive would take upwards of 1½ hours!). That’s too far to drive daily so they will move to Hückeswagen sometime in the next few weeks. They’ll be staying next door to several other staff members there and the office building will be within cycling/walking distance. Ben and Wina are really looking forward to making it their home!
As a family Ben and Wina need time to build a good foundation and to draw closer to each other and grow in faith so they’ve determined to stay in Germany without plans to return to PNG at this time.
What does this mean for the work among the Bali people in Papua New Guinea? None of the three families that worked among the Bali people have been on the island since the summer of last year as they have all been on home assignment in their respective countries (Germany, USA and Northern Ireland). Please pray for them as they all long for the Bali people to have the Gospel clearly presented in their own language.
Ben and Wina want to express their heartfelt gratitude to all who have prayed for, supported and encouraged them.