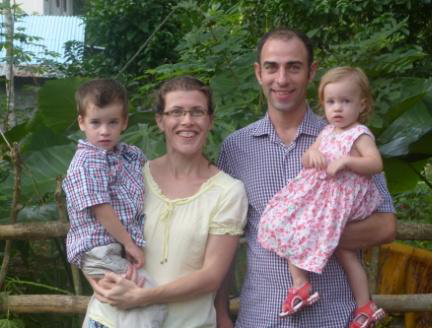 Classes are again underway at the national training centre in Asia-Pacific where Samuel and Judith with Joel and Hannah serve. During the break they took it a bit slower than usual because they realised that they were quite exhausted after graduation in May. Looking back on their first year as staff at the national training centre they see that a lot was going on. Some things are just part of everyday life but when they add up they can get tiring. One thing that is as challenging for them as it is for everyone is to put the Lord first. When so many things draw our attention it can be difficult to be still before the Lord. Samuel and Judith would value your prayers for their relationship with God to be their priority.
Last school year Samuel taught the missions course together with two other co-workers. Samuel was more or less the assistant. This school year, Samuel will be the one training others. One of his co-workers together with his family has gone to a neighbouring country to serve there. On the one hand they are very sad to lose such a good co-worker and friend. On the other hand they are excited to see the first family from the country to go and serve the Lord abroad. So now two of the students that just graduated in May will join the team and help teaching. Besides teaching Samuel still helps those families that are finishing their national culture and language study before going into a ministry. For this job Samuel needs a lot of wisdom to give the right advice and help needed.
Judith is mostly home to take care of Joel and Hannah. Recently she started to work with the regional book keeper for a few hours every month. The lady that is doing the bookkeeping right now is planning on moving into another ministry early next year. So Judith is being trained to take over in the future.
Joel goes to “kelas anak” (child care programme on campus) and even knows how to speak the local dialect. Unfortunately, he already has to learn to say goodbyes when his friends leave after their parents finish the training. Joel loves books and his favourite one is definitely the Bible. He knows many Bible stories but pray that he also understands the truths behind them and longs to live his life for God.
Hannah had been unwell at times her lungs seem to be her weak spot. She is a happy and energetic girl. She loves to play in the sand and has discovered that she can sing as well as talk.