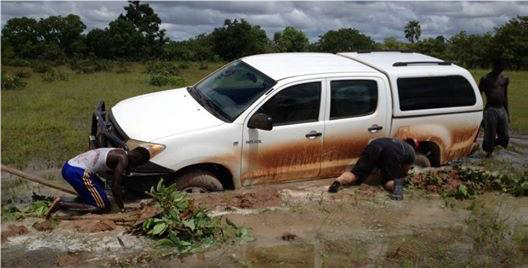 One of the missionary families has just about reached the language level required to begin other ministries such as literacy and translation! How exciting it is to see the work amongst the Konyagi moving forward!
While Alessandro and Chantal were in Guinea, they saw their house and met with the contractor. The work is progressing and they were happy to see that the cement roof had been poured and that the electrical conduit and plumbing had been installed! They are thankful for a contractor who makes sure everything is done well. However, there is still much work to be done. There are some issues with the well and they hope it can be completed before they move. Only God knows when the house will be ready and they will actually be able to move in. They are so thankful that at least whilst they wait, they are able to continue to progress in learning the language.

On the way back from their new house to their co-worker’s house where Alessandro and Chantal were staying, the vehicle got stuck in the mud twice. The second time it was really stuck! Another of their co-workers went to get his vehicle, thinking he’d pull them out, but instead he got stuck in the mud even worse than they did. It took almost four hours during the hottest hours of the day and with the help of about twenty people to get both vehicles out! It looks like they’ll have to do something about that ‘road’ before the next rainy season!

Since they’ve been back in Dakar, Samuel started school in the mornings. He enjoys it and it’s helping him improve his French. Continue to pray for his protection, especially now that there is a higher risk of being exposed to foods he is allergic to.

Two weeks ago Roberta arrived! She is an Italian who will help Alessandro and Chantal with Samuel and Jolissa for about six months. This allows them to get more work done and spend more time in Konyagi language study. Pray for her in her adjustments and as she learns English.

Alessandro and Chantal’s shipment, which includes their solar electric system, is on its way to Guinea. It should arrive by next week. Once it arrives, one of the mission’s administrators will take care of getting it out of customs. This isn’t an easy thing and custom fees can vary greatly. Alessandro will make the long 18-hour trip (one way) to get their shipment and bring it to the village. It won’t be an easy trip since the roads are in bad shape after the rainy season. Alessandro has never travelled in southern Guinea so they’re thankful that one of their co-workers has offered to go with him. Please be praying for all of this!
A huge thank you to each of you who pray for them and who contribute to this ministry.