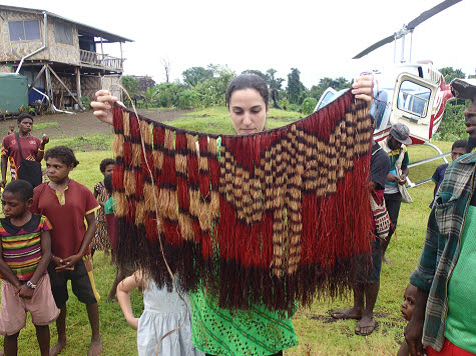 During their stay in the village the Callahans were able to choose the spot to build their house. They also cut the lumber for their house and they finished that job in time which was a great encouragement. It was also a good time for the Tousch family to continue to get to know them.
Seth Callahan was able to visit the village again with four guys to start building his house. As well as working on house building, working on good relationships in the community is essential!
While the Callahans were in the village Abigail had scarlet fever. Even though they were all living in the same house at that time it seems no one else caught it. André and Aurélie are thankful for the mission’s doctor who is always quick to help them by email! In the midst of all that it has been a bit hard for them to continue to work on language. Thank you for praying for their language learning.
One day a lady told Aurélie: “You don’t have to fear crocodiles and snakes. They don’t attack without a cause. If you have a problem or a conflict with someone they feel it and they attack you. Otherwise you’re fine. One day when my son was young, he was misbehaving and I got mad at him. Just after that he got bitten by a poisonous snake. It was my fault, I should have apologised. He got sick for two days but he eventually recovered.”
In this context it is very important to be “indj’undughu” – literally “one belly”, which means “in agreement”. People try hard not to have conflicts and to be at peace with one another. This causes obvious problems with child raising, as they try not to upset a child even when he disobeys.
Pray that André and Aurélie and their co-workers might be good examples in this area by displaying godly child raising.