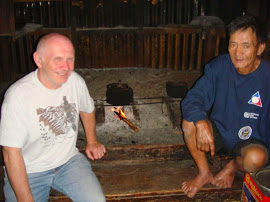 The organisation that recorded the NT only does the NT, so one of Ragnar and Elizabeth’s first chores was to find someone to record it. They are thankful that they were able to find someone willing to be involved. The three main readers who helped with the NT were also willing to continue reading several chapters each.
Ragnar and Elizabeth’s hallway was turned into a ‘studio’ and they hung blankets up on the walls, tying them with string over the door hinges as their neighbourhood can be quite noisy in the daytime, with nonstop construction and plenty of dogs barking,
The recording team were a great bunch of men to work with – they were able to laugh at their own mistakes and keep moving ahead. With a very patient technician, the project went very smoothly.
While Ragnar was helping to record the Kankana-ey NT, the leader of Faith Comes by Hearing (FCBH), told Ragnar and Elizabeth that he had also recorded the Ifugao NT. He had put the N.T. on five solar operated recorders, for non-readers, and would like to give them to the Ifugao people.
Ragnar was happy to comply when the leader of FCBH asked him if Ragnar could take him to the Ifugao people to deliver the NT. Although Ragnar and Elizabeth had known the church planter in that tribal group, they had never been to that area.
When one of the readers saw the name on one of the recorders, his eyes lit up. He shared with us that that was his mother’s maiden name and she was from that province. He was anxious to know if some of his relatives were believers, since they wanted a recorder. So Ragnar went with this man to the Ifugao people instead as the man wanted to see if he could meet some relatives. Ragnar was happy to have a companion for the long trip.
They were on their way bright and early and at the end of the day they were thankful they were able to find the village and complete their goal of delivering the recordings. They were disappointed that they were not able to meet the man’s family, yet thankful to be home again safe and sound before midnight.