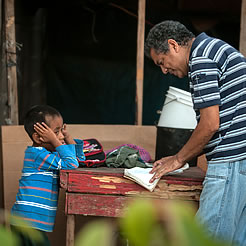 But God was preparing Miguel to work with the Triqui people of Baja California, Mexico. After moving into a Triqui community, gaining fluency in their language and developing relationships with the people, it became clear that syncretism was a huge problem among the Triqui.
“They’ve mixed their animistic beliefs with … Christianity,” Miguel said. He explained how they worship the sun and make sacrifices to the rain god so that it will rain.

And when someone dies, they put clothing, money and other items in the coffin to be used on their long journey. They never say where that journey will take them because they really don’t know. They have no security of what eternity holds.

On the other hand, some believe they are Christians simply because they go to church. Others attend services, praying and applauding with no real understanding.
They have a form of religion with no real relationship with their Creator. “Seeing this reality motivates me as I translate and prepare chronological Bible lessons so that they can hear the gospel in a way that’s understandable to them in their own language and culture,” Miguel says. “It’s hard work, but God helps me.”
The first 30 lessons are ready to be checked and then revised. Miguel, along with his co-workers Amelia and Gricelda, is looking to the day when teaching will begin and the Triqui people will have their eyes opened to the truths of God’s Word.
David, Christine, Abby and Sarah appreciated prayer as they recently returned to Northern Ireland for home assignment. Pray that this time with family and friends will be a blessing.