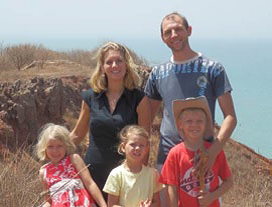 Andrew and Eliza didn’t think it would be possible to change roles since the problem would then just shift, yet the day after the staff fasted in order to pray for staffing needs a couple applied who could take over most of Eliza’s classes. Andrew and Eliza sensed that the Lord opened the door. Although they have some fears, Andrew and Eliza are also excited and thank the Lord for His clear direction!
Recently, Andrew was called ‘the new Nehemiah’ because he is supervising a wall building project. He enjoys working together with the Senegalese men. The construction of the highway, which is coming from Dakar in the school’s direction, is still ongoing. The highway will be right next to the school. So to increase the security of the school, the school decided to build a three meters high wall around the schoolyard. The bricks are handmade and so far they have 25,000 bricks and 450 meters of the wall is already standing. Every day seventeen people are helping to build the wall: two teams are making the bricks, while others are stacking them along the fence, and still others are building the wall. The youngest makes Senegalese tea with a lot of sugar to keep everyone going.
A lot has changed since the first time that Eliza and some colleagues went with a couple of women to the local village. Eliza had taken a ball and a skipping rope along to play games and to get acquainted with the children. They were not the easiest ones. Most of the children there were fighting, while the ‘white women’ were trying to keep it peaceful. Sometimes, the games were purposely disturbed by some of the boys. Every Thursday, Eliza and her colleagues would say to themselves: ‘we are doing a good thing, they can experience the love of the Lord, a friendly smile or a hug’, but actually they didn’t feel like going. However, people from the village and even beyond started to express their appreciation for the weekly children’s-club, and they even offered them a house (although under construction) so that Eliza and her colleagues didn’t have to sit on the street anymore!
Now things are totally different. When Eliza and her colleagues arrive, the children run towards them to take the mats to the house. They sit down and wait patiently until Eliza and her colleagues start telling a Biblical story, start making a craft, do some drawing, play with the ball or another game. Recently the owner of the house told Eliza and her colleagues that his two-year old daughter kept asking a couple of hours in advance ‘when these toebabs (white people) would finally come’.
Shortly after Easter, there was an opportunity to tell the Easter story in the village. They started with the Creation and the Fall to make clear that everyone is separated from God and that we all need a Saviour; and they continued with the death and resurrection of the Lord Jesus. A missionary who speaks the language form this region (Serer-Safen) went with them and translated what I was said. In this way, they could be certain that all the children would understand. The owner of the house was also there and he was nodding in agreement during the whole story. Pray that these children and their parents will get to know the Lord. Not as something only for ‘the white people’ (they often see it that way) but as their personal Saviour.
Although the summer holidays hadn’t begun when the NTM West Africa conference started, the school made it possible for Andrew and Eliza and family to attend. They really enjoyed this time. It had rich devotions and topics in with their main purpose to reach the unreached in West-Africa. As a couple, Andrew and Eliza were challenged again and are looking forward to how the Lord will guide them in the near future as they plan to work in an NTM ministry again. This means that they will be one more year at the school and then go on home assignment to prepare them further for the years to come!
In just a few weeks the summer holidays will begin. This is something that Andrew and Eliza look forward to and dread at the same time. A lot of staff members will go away. Eliza will have to part with two beloved friends. The life of a missionary can be lonely sometimes; this makes it even harder to say goodbye to such friends!