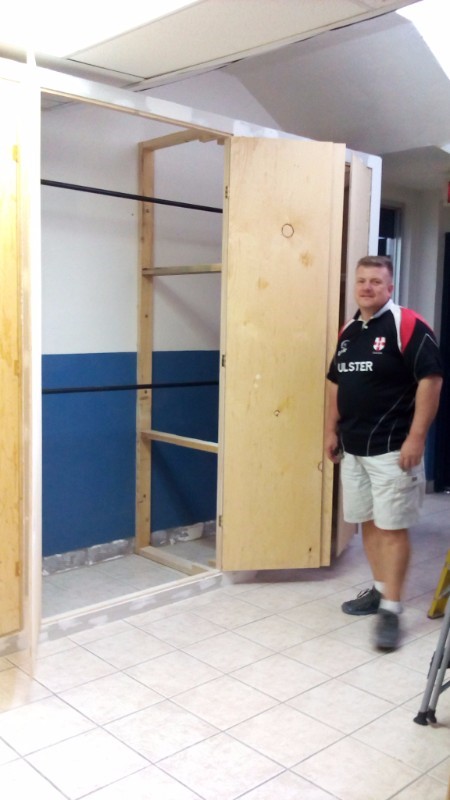 The annual school sports day which they call “Family Fun Day,” took place Friday, October 28th. It was held at the National Missionary Training Facility outside of the city. David was working out there quite a bit last month and one of his projects was making benches. They turned out great! Everyone appreciated having the extra seating while enjoying the events.

Christine organised the Family Fun Day but she could never do it without David’s help and all the many volunteers, not to mention prayer! Praise the Lord He blessed them with perfect weather, no injuries, and a great time of competition and fellowship.

Sarah had been sick earlier that week, but was able to participate with her team. Abby got sick later in the week and unfortunately was not able to go. Sarah stepped in and helped lead the team in Abby’s absence. Thankfully both girls are now feeling a lot better. They are glad for a week off to recover!

Another of David’s projects has been adding a closet at the school. He has been working with one of the graduates and they are making good progress. By next month they should have it finished. He still has quite a lot of projects still to do, so they would appreciate your prayers for his ministry.

David and Christine covet your prayers for a family whose children are in their school and they are also friends and neighbours. This month the father’s 29-year-old brother fell to his death in a tragic accident. He left behind a wife and two young children. The whole family has been devastated, as you can imagine. David and Christine were able to attend the funeral and were encouraged, as were they, in the hope they have as Christians. They whole family will be reunited someday in heaven as they have all put their faith in the saving work of Jesus Christ. It is still hard and will continue to be, so they appreciate your prayers for them.