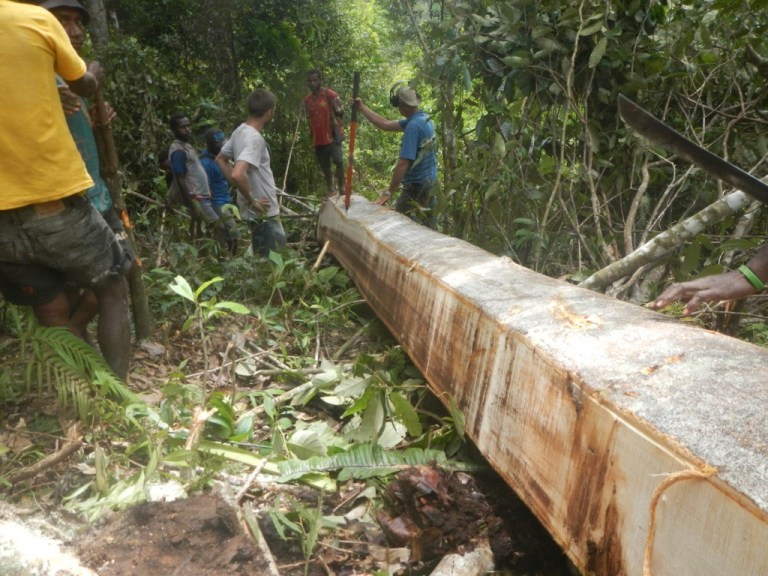 For Steve Stanley and co-worker Rhett ‘Milling trip 1’ was a mix of encouragement and discouragement. The encouraging side was the fact that they cut and stood up all 55 house posts for their team’s houses. Relationships building was also incredibly encouraging. The Kovol people are genuinely excited to have the team among them and have been nothing but kind, helpful and engaging.

On the negative side two out of three of their chainsaws were out of action by the end of the trip (due to faulty bearings and broken chain tensioners) and their milling progress is not quite what they had hoped.

Praise God that that they had no injuries; operating chainsaws comes with some risks! The terrain in Kovol is entirely mountainous and it was rare that the trees they cut down fell in a flat area. They have slowly (with a lot of Kovol help) worked out a system for working with logs on slopes. In total, they cut down and milled 16 trees in two weeks.

Steve and Gerdine praise God that He has provided all they need financially to be able to fly in and out of Kovol. 1 Tim 6:17, “God is our provider!”

During Steve and Rhett’s two weeks they were initially well fed by the people from four different villages. The people said, “We want the work to go well and no one to get injured, so we need to eat meat before we start.” Those living in one village where the team are not going to be living, apologised that their eagerness to have them live with them turned into false rumours talking the other villages down to try and sway the team to live with them. It shows that Kovol people deal with problems rather than ignore them which is encouraging!

Thirty to forty guys went with Steve and Rhett daily to help with the work. They took care of operating the chainsaws while the Kovol took care of carrying lumber back to camp and moving the logs into position to be cut.

At the beginning Steve and Rhett had a community meeting where they talked about their needs for food and security. They had taken some food with them, but did not have the time or firewood to cook it every day with their work schedule. The Kovol ladies stepped up and they had a hot meal three times a day; always Taro soup with greens – so they weren’t hungry!

They also pointed out that they had brought many tools with them so there was a need for security. The Kovol people responded by placing guards around their tent 24/7 and not a single item has been pinched. Even when they have dropped a multi tool on the trail, it was picked up and brought to them.

Steve and Rhett have now returned for the second milling trip. This one will be three and a half weeks long and will end with helicopter shuttles of building materials. The goal is to cut 1200 pieces of wood that they will need to frame their two houses in October – floors, walls and ceiling. To do that they need to speed up their milling times ten. Pray for them! It is a daunting task!

Steve is going to have to hike out after two and a half weeks to get to Madang to prepare the shuttle material. He is not looking forward to a 16-hour hike after two weeks of logging! He will get to Madang to load a truck with the first load of building materials – mostly roofing iron and 15mm plywood (the floor). The truck will get as close to Kovol as possible (18 miles away on a logging road) and the helicopter will meet him there. Steve will have to live for three days on the side of the road while the helicopter hops back and forth carrying 400kg of building materials at a time. Pray for good flying weather!