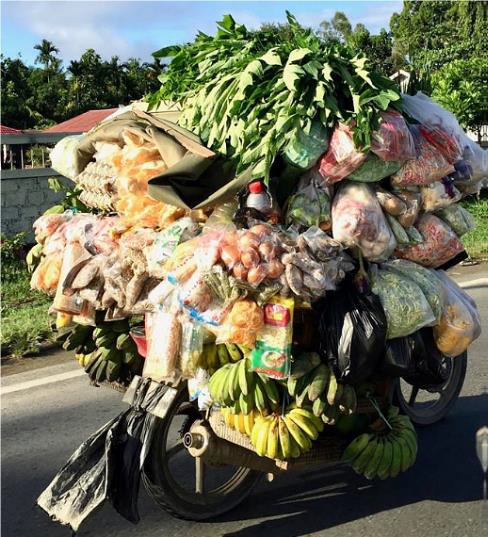 Sometimes she felt that she only left the house for meetings or when she had run out of food. A tiny motorcycle-market also sometimes stops by when she doesn’t have the time to go to the market.

Now all the written work is complete and the nervousness about the oral exam on she had on April 4th is behind her. God has carried her through, saved her from sickness, has again and again given her new energy for the next step and has put faithful people around her: Friends, people who pray, who encourage, who help… Karin is so thankful to God for this second milestone (the first one was her training in the UK) of her preparation which will allow her to help bring the Gospel to people in their own language who otherwise would not have any access to God’s Word. The next milestone will be the relocation to one of the tribes. Which one? The team, including Karin, will have to survey some areas and they are praying the Lord would lead their team to the place HE wants them to serve.

Often the tribal situation is evaluated only by staying at the site. It will be exciting! In the past ten years, there have been substantial changes in the situation in the tribes – not necessarily always for the better for the people who live there.

Before the surveys, Karin will be on home assignment in Germany. She has been in Asia-Pacific for just over two years and is very much looking forward to going home.

Most likely, it will be a short home assignment of three to four months. It will still give enough time for her to see her family again (especially her Dad whose health is not that good anymore), visit her church, meet and report to her supporters, meet her NTM Germany family, revive friendships and to give some insight about a missionary’s life to people who are considering going to the mission field. She will have many doctors’ appointments and some documents require renewal. She has also scheduled some vacation time and then she will have to do loads of preparations for the next term in Asia-Pacific. Pray for Karin in all the preparations, plans, packing and travelling.

Recently Karin had the joy of teaching reading, writing and maths to some children. She only had a few months and only two hours each day for this. However, she is thankful to God that He provided this opportunity. Pray that the children that they will seek God. Also pray for their parents, who will graduate from Bible school this May, that they will be able to take everything that they have learned from God’s Word back to their tribes. Pray for Karin as she says goodbye to these kids and their parents in two weeks. Most likely they will not see each other again.

A good friend of Karin’s, also from Germany, teaches in English at a school which was founded in order to help missionary families. There is a need for many teachers at this school. Karin substituted for her once and it was fun for her to get to know these kind kids a little better. Her friend will finish her last year on campus this May, pray that God will guide her on her future path (maybe into full time missions).If you are a teacher and read this bulletin and have always wanted to work abroad; there are many needs and opportunities to serve.

Thank God with Karin that He has carried her through these past two years and through the second milestone on the way to help to bring the Gospel to people in their native language.