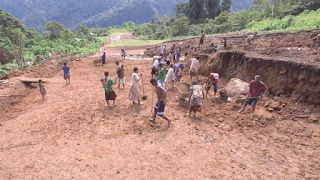 Geoff and Shannon’s reasons for being in town were firstly to attend the regional conference where they got to see many of their other co-workers and wereencouraged by Biblical teaching and fellowship. Secondly to have the consultant check the Mibu translation of Ephesians and 1 Corinthians translation. Thirdly, to get a much needed two week break, one week of which they spent in the Goroka area, in the highlands, and one week of which they spent down on the coast, in Madang.
Geoff and Shannon are excited to report that Ephesians and 1 Corinthians are just a few minor tweaks away from being ready to print. Just a few days’ work really… well that and then formatting for printing and making into a booklet. Such great Scripture for the church to have in their hands! The translation was not without its difficulties either, so Geoff and Shannon feel good to be done at this point!
During their break, they were able to do some fun things together as a family, like shop in town, taking the kids out on ‘daddy’ dates, swimming, eating out, and going out sailing and swimming on a boat at Madang.
On returning to Mibu, as the Husa family approached the Mibu landing pad in the helicopter, they were amazed by how much the airstrip had been transformed during the month and a half that they were away! People had been working just about every day for the last couple of months. The Mibu people themselves have set a goal to have it finished by June or July, 2016. And at the rate it’s been going, it looks like they’ll be able to do it. This is the most sustained effort Geoff and Shannon have ever seen on the airstrip!
Geoff and Shannon are thankful to see that God has been blessing the Mibu with rain just about every day the last couple of weeks. The ground is wet, things are getting green again, and people’s gardens can be planted now. Thank you Lord!
Also Geoff and Shannon are super thankful for their core team, back in Arizona USA, who raised enough funds to take care of Geoff and Shannon computer needs for the next 5 years!