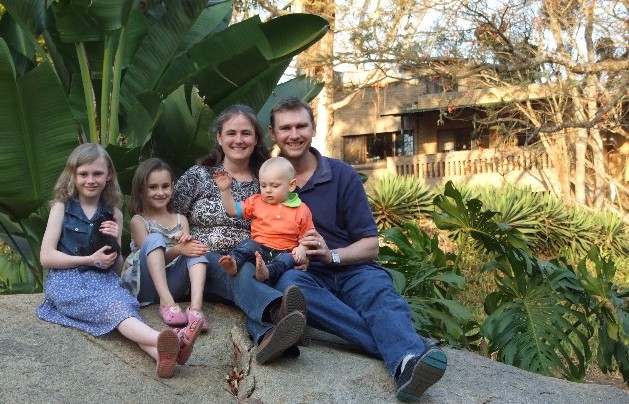 Within the next few weeks, Azarja and Renee Groot and family, who serve with Mercy Air in South Africa, will be experiencing some BIG changes, as they travel to visit Europe and the USA. Pray that it will be a season in which they might experience the blessings of God.
After three years in South Africa they will be taking a period of home assignment. They will fly direct from Johannesburg to Amsterdam. Their visas will be expiring, but more importantly there are friends and family members whom they haven’t seen for years. They will be in Europe until mid-December, after which they will be in the USA until mid-February.
Whilst Azarja and Renee are excited about seeing everyone again and even celebrating the holidays with family, the thought of travelling long distances with small children is a bit daunting. Being away from the home, routine, and their South African friends will bring new challenges for them all.
Azarja’s sister, Tabitha, and brother-in-law, Fernando, have been working in Mozambique for several years with NTM. They recently visited Azarja and Renee at Mercy Air on their trip from Brazil. It was precious for Azarja, Renee and their children, to meet Fernando and Tabitha’s baby boy, Daniel.
Upon arrival in Mozambique, Fernando and Tabitha found their place in need of some repairs. When Azarja and Renee heard that Azarja’s parents were making a trip to go help them, they decided to also lend a hand. Azarja flew up and stayed with Fernando and Tabitha for a week. It was quite a surprise for his parents to see him arrive out of the blue. A lot was accomplished and some precious memories were made.
Azarja and Renee are thankful for all that God has done over the past three years. He has been faithful through every season. Throughout this year, many have prayed for the situation regarding Ezra’s visa application which was initially rejected in February. Finally, after numerous emails and phone calls, Ezra received his visa.
Pray for Azarja and Renee in the months ahead as traveling will bring challenges and that God would work through them to be his hands and feet. Also pray for continued blessing on Mercy Air in the coming years.
Recently Mercy Air’s Kodiak returned from a short week in Mozambique with a medical team. For the first time, this team included two people to conduct hearing tests for schoolchildren at the mission school. 180 children were tested. A shocking number of them were suffering from ear infections, and some will need hearing aids.