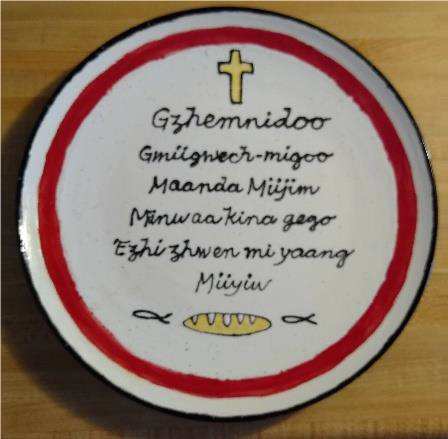 Through some co-workers from Ethnos360, Daniel and Nicole Noort were able to visit a pastor who leads a native church, two hours from where they live. It is good how the Lord connects everything. This church is connected with a ministry in a location they visited in 2019 when they stayed in that area for six weeks. He is a First Nation missionary reaching out to his own people. He also gave Daniel and Nicole contacts who would be a great help for their ministry.

Recently they were asked to help prepare for the three-day camp meeting on a reserve 25 minutes from their home. It was great for them to work together with a First Nation lady and her daughter. While cleaning the chairs for the visitors, they both shared some stories about family and life. Afterwards they were invited into her home for a meal, which is right on the reserve with a lovely view of a lake. She took them for a tour of the reserve and they heard of some of the family relationships but also of some of the struggles that she prays for every day. She has such a passion for the Lord and this camp meeting brings a lot of First Nations people from different places, including her own, together. It was wonderful to see so many people singing together, eating together and telling their stories. Through different visitors, Daniel and Nicole now have some invitations on different reserves. Most of them are still not open for people who are not directly related due to Covid-19.

On the first the day that a camp meeting started, Daniel discovered a large nail in the sidewall of one of their van tyres. They also found out that the new tyres they had bought were no good for their heavy vehicle and they would not be insured when having an accident. Bewildered they took the situation to the Lord. The Lord answers prayers in unexpected ways. A new neighbour, who just bought a house behind Daniel and Nicole’s offered another neighbour friend a painting job. He did not have the time to take it on and he thought of them. They tried to make sense out of all this. “Will this job not interfere with our goals? What is the Lord telling us?”

“Trust in the LORD with all thine heart; and lean not unto thine own understanding. In all thy ways acknowledge him, and he shall direct thy paths.” Pr. 3:5-6. They are trusting in Him that He has this for them at this particular time. It is a great way to get to know their new neighbours and other locals who visit the house. They are thankful for the strength and energy to finish work around the house and in the neighbourhood.

School starts September 8th for David. The bus route is set up and he will be picked up eight minutes from their house. He has longed for this moment. The long break has been such a stretch for him and he said that he could only endure this by the Lord who works through him. He is still waiting for his driver’s test. Through the new connections they have, David can plug into a youth group, which will start sometime in September. Pray that David will make Christian friends and be a light in the new school.

On Sundays, they try to go to different churches in the area that have services in order to meet fellow Christians. When they go to the church on the reserve, they always have a fellowship lunch afterwards with their dear friends. One of the ladies in the native church gave them a plate, which she designed herself, with a text that means; Thank you Father for the food you blessed us with in Jesus Name, Amen.