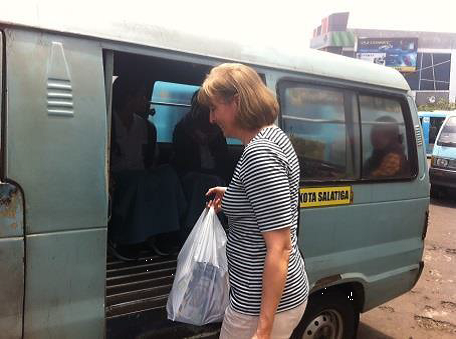 Karin’s house was furnished with the basics when she arrived. The team and co-worker prepared everything and they are still a great help to the newcomers when they arrive not knowing how to speak the language. The house has space for two singles, but at the moment Karin is alone.
But don’t worry, she’s not alone – Ibu A (Ibu means woman or mother) is helping her to manage life in Asia-Pacific. She cooks delicious food and Karin appreciates her help as it gives her more time to study. Karin still cannot really tell her that, except for “thank you”, “It was delicious” and “that’s very good”. Ibu A doesn’t speak English, which forces Karin to communicate in the national language. Ibu A belongs to the majority religion. Pray for Ibu A, that the Lord would open her heart. She lost her baby in December (a girl) shortly after birth and she has an eleven year old son.
Karin has found the orientation team and consultants are extremely organised and determined to help new people (two families and Karin) with the e2 (equipping stage 2) programme. Now it is their opportunity to live out the teaching they have had in the training (e1) ‘at home’. The theory must become reality. They’re encouraged and required to use their time for the language and cultural studies. But the key is not just to learn something about culture or how to express something in the language, but to “fit in” and become someone who they currently are not – someone who has a relevant and impactful presence in the host country so that God can use them in the context of this culture. This process takes time, starting with warm-up phase, a time for adjusting to the new surroundings and observing the community and neighbourhood. Karin has started to learn survival phrases and practical expressions in order to file cultural observations. Karin has been going through her community area to find out what the people in her neighbourhood are selling or doing, and so she has taken the Angkot (a public transit van) many times in the city for shopping. Another task that she had already practiced in Mission Simulation at North Cotes was to create a community map with all the houses in her neighbourhood.
Karin has just started working with a language helper. At the beginning, they have five language helpers assigned for the first two week. They all speak English, which is a big help from the start. Later, they can choose their language helper. Using a technique also learned at North Cotes, Karin will Plan – Participate – Process – Practice.
But much more than learning, Karin needs to create a deep interest in the people around her and their views of life, which demonstrates God’s heart and interest in them.
Pray for Karin to obtain a language visa, which is currently being processed.
Also pray that God would enable Karin to learn the language and culture effectively and not have to use the sentence “Belum bisa Bahasa” (“I cannot (speak/understand) now”) as often and that she would not lose the view that life is simply not about us; it is about God and His plan.