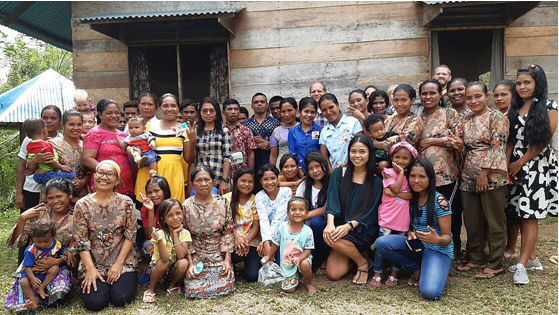 Sasch and Charissa Schwendich with Ruben, Judah, Hosanna and Zadok are doing well, generally, although things are always especially busy in December, and they are struggling a bit with exhaustion and some of them have colds.

December always holds potential for tension as everyone is back in the village together. Last year an issue was long in being resolved. This year praise God, after an issue arose it was quickly repented of and forgiveness sought. Continue to pray that God will work in his heart, so that there will be a true change for the future.

Earlier this year there was an opportunity to buy land for a dorm for the village youth. Since the need was urgent, and building takes time, they rented a house for this school year to make a start. The first three months have been a blessing to many, but there have also been many hurdles and trials. Please pray as they gear up for the next term. Pray for extreme patience, wisdom, and endurance for the Buru couple who are acting as dorm parents.

In any spare time, Sasch and Charissa are also preparing for a literacy workshop that will be taking place in February. They will need to travel to a large city for this so please pray that travel restrictions will loosen again to make things easier. The trip also means that they needed to start school again right away to get a good chunk of study in before the disruption of travel. The kids were excited to get started, pray for good energy levels for the parents!

At the end of next month they hope to have some friends (missionaries on another island) to visit them, who hope to help them make progress on continuing the construction of their church building. That work has been halted now for over a year. Pray that things will go smoothly as they prepare to begin again, and that there will be no trouble over land rights so building continues in peace.