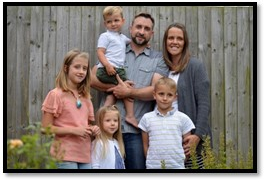 Five years ago, when Simon and Annika were in the Mengen a young boy nearly died of Meningitis (and possibly Malaria); he was brought to them when he was very low, the illness had progressed and he was at risk of dying. They consulted with our NTM doctor; his blood pressure was low, he was delirious, had a very high constant temperature, shallow breathing and was severely dehydrated.

They were told he might not make it through the night. Through God’s grace Simon and Annika and their co-workers had medicine available; they prayed and gave him injections through the night (even though they had never done these things before). Praise the Lord the boy pulled through. Later he brought them a stalk of bananas to say thank you for helping him. Even though the boy was thankful, he never came to any of the outreaches as his family trusted in other things.

Simon and Annika have thought of him from time to time, as they have looked through old photos and prayed for their co-workers and friends, the Mengen people. Their partners recently told them that there is now a new outreach going on in the first village where they planted a church (the one where they lived and will go back to). In this village, the younger generation are hungering for the Gospel and are asking the Mengen church to teach them. Pray for this new outreach. Simon and Annika are praising God that the boy they helped five years ago is going to hear the Gospel for the first time!

When Simon and Annika had to leave PNG because of their daughter Karis’s heart problems and found out they may not be able to return, they had many concerns for the young church, fragile as she was. But, as they were working through these things, shortly after Karis’s birth Simon read Acts 20:32. In this section of Scripture Paul had to leave this young church knowing they would come under attack. This verse humbled Simon and became precious, “And now I commend you to God and to the word of His grace, which is able to build you up and to give you the inheritance among all those who are sanctified”. Simon thanks God that He and the Word of His grace are enough for the Mengen people and that He has worked through their partners and the body to build up the Mengen church. Simon and Annika are excited and thanking God that they can go back and work with their partners, the Mengen church and Mengen Bible teachers. They get to learn from them and join with them in seeing the church grow, mature and reach out to new areas. And through prayer for the Mengen you are right there with them, part of the work.

There are approximately 120 Mengen believers in the village. Praise the Lord that most of the villagers have a new hunger for God’s Word and that many young people are hearing the Gospel for the first time. In addition, a nearby village that has always seemed closed are asking Mengen Bible teachers to do an outreach. Pray for many to be saved.