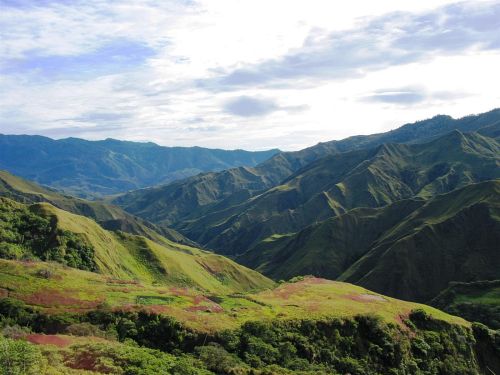 The weather was beautiful when Robert and Nicole flew into the tribe. They enjoyed seeing most of the Iwalaqamalje believers again. The second Sunday when they were there, believers from the different villages came to the river for a baptism.
During their time with the Iwalaqamalje believers Robert taught from 1, 2 and 3 John and also worked on translation with his helpers there. They made good progress. The second part of Exodus is not easy to translate but the Lord helped. As well as translating more of Exodus, they finished the translation of Jonah and made a start on Esther, Daniel and Proverbs.
The audio Bibles that Robert and Nicole took with them turned out to be much wanted items. They took them for the people in the churches who are unable to read. However, many people outside the churches also wanted to listen. There were several nights during which people were listening to the audio Bibles for hours. Robert and Nicole had only recorded the book of Genesis. Next time they will take more audio Bibles and Robert has already started the recording of the New Testament. He is also planning to record the Bible lessons. So there are new opportunities to reach the people in the different areas of the tribe with the Word of God. Also, Robert is planning to record the Bible lessons, with translated Bible portions, for the Iqwaye and Gwase people on the other side of the tribe.
The second part of Robert and Nicole’s time in the tribe was spent on the other side of the village where they worked on the dialect changes. They completed all the evangelistic Bible lessons for the Iqwaye people and almost finished the Old Testament evangelistic Bible lessons for the Gwase people and started working on the New Testament lessons for them.
Wes Chappell, with whom Robert and Nicole moved into the Menya area in 2009, has meanwhile completed culture and language study and will be working on translation and Bible lessons. Robert and Nicole are glad that soon the people there will hear the Word of God as well.
During Robert and Nicole’s time in PNG it was very dry and last week one of the believers called them and said that it was still very dry. It is a hard time for the people in the tribe as they depend on food from their gardens.
Back in the Netherlands Robert and Nicole’s children Elianne and Amos have started their studies and internships again and Jorim has started his last year of elementary school.