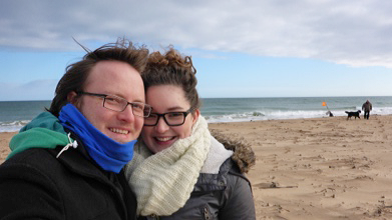 Recently Paul was heavily involved in the Reach Conference, organising music and practices, going to planning meetings, etc. The conference was such a huge blessing to many and Paul and Nom are so thankful for the energy that God gave them to be able to faithfully lead the worship each day. They praise God for the number of English people who have been challenged to enrol at the college after university. Pray that these young people who attended Reach won’t forget the challenge of this weekend. One missionary told them that for every 100 people who have been challenged to go to the mission field only 1 goes. Let’s pray and see God change that 1 to 99.
Nom has actually really enjoyed linguistics in the past few months. God has really given her the strength to keep going when times have been tough and helped her to do her best. She just has one large project left: studying and analysing a language for about a month. After that it will be graduation and then time to leave North Cotes. Nom knows that God has helped them to think about their future and get them ready to leave North Cotes, but it will be hard. Pray for the next two terms that Paul and Nom can create special memories with those they love before leaving.
Nom helps to lead the Girls Bible study for the older girls, which has been going well; they have been looking at topics that will hopefully help the girls when they go to university. Pray that the leaders will have the wisdom to know what to study in the last couple of terms.
Paul and Nom have been looking for a house for after finishing at North Cotes College; they asked around in the church that they want to join once they leave NCC. One of the guys in the church told them, “My Company has a house that I am fixing up and it should be ready by the time you would need it.” What an answer to prayer. Paul is going to be applying for jobs in that area, which means writing a CV and things, which can be quite tricky, as all of his years of education were in a different country.