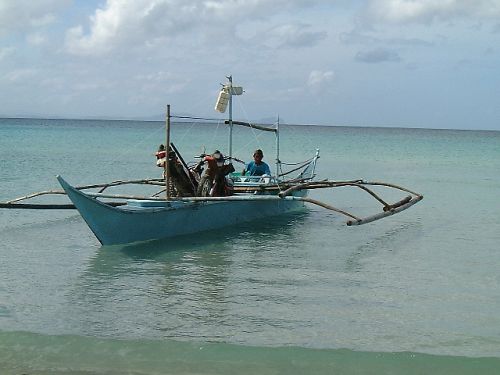 Most have grown stronger in their faith. Unfortunately, those who attended the outreach in the next village don’t seem to have grasped the truth of the Gospel and are just willing to try anything in the hope that something works!
Recently the village kids, teenagers and parents thoroughly enjoyed the DVBS (Daily vacation Bible school) which was simply themed, ‘Jesus, our Saviour and Friend.’ Around 60 kids came each day to hear more about Christ and His power to save.
It was very encouraging for Paul and Cathy to see the believers getting involved and for a first this year, the fathers as well! The kids work was viewed before as a pambabae (for women) but this is changing and it is great to see fathers taking an interest and responsibility for their kid’s salvation!
At the end of the kids club around ten of them did something which is very against their culture. They were willing to act independently, stand out from the rest and identify themselves with Christ. Pray that these young lives will be lived wholly for Him, an opportunity their parents never had.
On Easter Sunday there was a time of open praise and thanksgiving which encouraged people to think of what their lives would be like if Christ had not risen again from the dead and their faith was in fact, useless. People shared what Christ had done in their lives and the change He has, and is continuing to bring about in them personally. Not only that though, they also shared about the change in their families and other relationships within the community.
For the first time, around eight young guys and three of the fathers are attending a camp in the South of the island run by Brethren Filipino missionaries. They are so excited to meet other believers and be taught for two weeks! Pray for growth through these camps
Paul and Cathy find it incredible when they sit back and think of all that God has done somewhere so far away and in human terms, somewhere so obscure. He is redeeming for Himself people from every nation, from all tribes and peoples and languages. “Salvation belongs to our God who sits on the throne and to the Lamb.” Pray that these believers will become true disciples and tell others also. As is the case anywhere, they are tested and tried in many ways. Pray that they will hold fast and fight the good fight until He returns.
Paul and Cathy have been in the village now for just over a month and it hasn’t all been easy. Pray for contentment. They had to adjust again to being in a fairly remote location, away from family, friends and babysitters! However, they are thankful that they are able to be in the Philippines and are being used to disciple the Palawan believers and see them grow. A lot of time can be taken up with menial things and fixing things. Pray that we will have the mindset of doing everything for the glory of God! Pray for their endurance when the little things come. One example is the nightly infestations of various insects! All the lights go out as they shed their wings and crawl everywhere while they try to get the girls bathed and into bed. These little things can gradually wear them down!
Alethea has done really well and Paul and Cathy are very thankful for a happy, smiley baby who will go to anyone. Zoe is enjoying all the wildlife again – wild-pigs, goats, fish and even sharks and ants! Zoe has been keen to do ‘school’ which is good, but a challenge for Cathy!