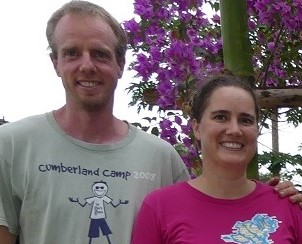 Aaron and Amy Speitelsbach serve among the Glarro people of Liberia. Last month Aaron was somewhat discouraged, and found it difficult to pray. Therefore, he did not feel the freedom to ask others to pray, when he was unable to pray himself. Things have now brightened up, maybe because of your prayers.

Aaron’s helper is back in their village (after about four months away) and they have picked up working where he and Aaron left off regarding editing Bible lessons. Aaron appreciates working with him as he understands what they are looking for, and can read along in the Glarro language pretty fluently. He works with Aaron in the afternoons and sometimes the humidity and heat zap’s their energy and concentration. However, they have still made some good progress with the editing so far.

Aaron and their co-worker Guy, continue to draft New Testament lessons, and record them with their group. Lately they have had some good discussions with the five men who are also becoming more punctual.

Healthwise, Aaron and Amy are doing fine, yet seem to have a low level of energy. It may be a lack of some vitamins. They are unsure but have started taking some, which include Vitamin D. The rains have started early and plentifully this year. Without the sunshine, their solar power system is barely giving them enough electricity to keep things working.

Amy faithfully continues her literacy classes, in which she has incorporated a devotional time and some memory verses. The progress the students are making is rather slow, but then, Glarro is a difficult tonal language with many syllables. Yet they had hoped for better. Aaron and Amy also hoped to be able to turn some of the literacy work over to locals, but there seems to be no interest for the moment from anyone who is capable.

– That He wants to use Aaron and Amy despite their weaknesses and that He gives them the grace and strength to continue.

– That Aaron’s language helper is back and able to work with him again.

– That God will give them a new passion and love for the people and good ideas for how to prepare them for, and bring them the Gospel even now, while they are still making Bible lessons.

– That some locals will understand the importance of literacy and feel a burden to come alongside Amy as teachers and helpers.

Thank you for your prayers for Aaron and Amy and the Glarro people.