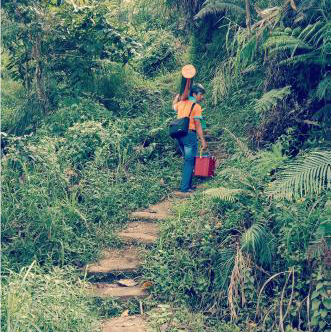 After carefully going over each lesson on the book of Acts several times, adding suggestions, making changes, deleting words and adding Scripture verses etc., Ragnar felt ready to check them one more time with his two Kanaknaey colleagues. They also thought it might be profitable to ask another couple of spiritually mature men to join them. The two men who are also very active in the church readily agreed.

These men gathered in their church building in the remote village each day for many hours. After beginning each morning with sharing from the Word and time talking to our amazing Creator, they went over the lessons, sentence by sentence. Ragnar was very encouraged at how smoothly it went. Each man was very concerned that the lessons were accurate, flowed smoothly and that they would be easily understood. Their many discussions were reassuring and sincere.

Ragnar stayed in a house near the church. He took along some cereal for breakfast and the five of them cooked rice and veggies for lunch, making sure there would be enough left for supper too.

At the end of the two weeks, they were thankful they had reached their goal! Now comes the tedious task of spell checking (not done by the computer) and working on the layout etc. An exciting day awaits when they are completely finished allowing them to go on to the next book.

Ragnar and Elizabeth thank you once again for being behind them in this project. They are encouraged knowing that you are praying for them. They are very grateful for how the lessons are moving along.