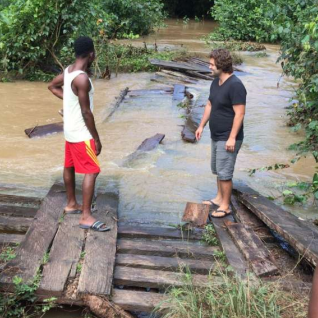 Thank you for your prayers for Aaron and Amy Speitelsbach and for the Glarro people in Liberia, West Africa. Pray that God will continue to create an interest in their hearts to hear and learn more about Him.

Aaron and Amy changed their plans and arrived in the city on Jan 11th. They are thankful for the flexibility of MAF, who even at short notice made it possible for them to change their bookings around.

Aaron is able to make progress in making bible lessons. He has been mostly working with one local man and then having a group of three other men arrive later to listen to their work and function as editors. He has three lessons ready and started to work on the forth one.

Even with only having worked on the first three lessons so far, Aaron feels that those lessons already have had an impact on two of his editors and on his translation helper. Their interest in and about God has increased and two editors have attended readily.

Their church planting consultant is coming to visit them right after they get back from Monrovia. He will look into the lessons that Aaron made and will give some tips.

Amy’s literacy class is still going slow, due to all the holidays. However she was able to help Aaron a lot with correcting his spelling (especially his tone) in his Glarro Bible lessons, and hopes to do some comprehension checking of the lessons as well as the first two chapters of John with some people. Pray for Amy as she reads the lessons to some ladies and the first two chapters of John and that Amy can come up with good questions that reveal if the material is comprehensible as she reads it to a locals.