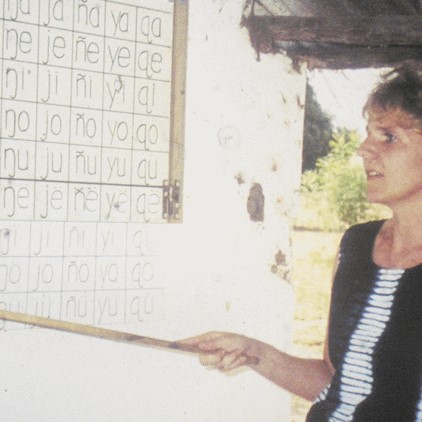 Anna Rodda analysed the Balanta-Ganja language in the 1980s and devised the correct alphabet for it. She worked mostly with one of the local villagers writing down what was said, and sorting the words on a PC database (a brand new technique at that time). This really helped her as she gradually deciphered which alphabet might work; she tested it – and it DID work!

While some Balantas learned to read and write, many did not. However, many more people have been taught to read French in school. Here is a quote from one of Anna’s past co-workers:

“Recently, several believers met to discuss how they could get involved in teaching literacy. A missionary from SIL who oversees literacy projects in the region, provided the group with copies of the materials we had prepared for any Balanta who knows how to read French to learn to read his own language. It actually can be used as a self-teach guide.”

So the years of Anna’s investment are still bearing fruit! The seed sown decades ago is bearing spiritual fruit. Anna’s village house is being used as their meeting place and to accommodate visiting believers. Overall, the Balanta people are now open to listen to the Word of God. They are encouraged in the Lord despite huge challenges; for example some people had invested in planting extensive orchards to earn a living, but the rains have been very limited.

The area in Senegal where the Balanta people live has been suffering from drought, the situation is similar for the Saafi people (the people group where Dubby and Anna served together.)  Last year one believer’s cashew trees produced no fruit; he depended on them for his livelihood. It could well be the same this year. This past month there should have been plenty of rain falling, but it was very limited. They are facing severe challenges and possible starvation. The believer’s testimony is ‘But God knows…!’  He said, ‘We are HIS problem!’

Pray for Balanta people; there are still relatively few who are believers. Pray for their encouragement and for physical food.