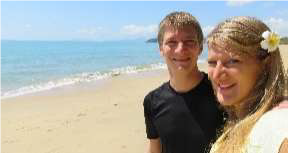 The medical facilities in PNG are not as advanced as in Germany. They are glad that they returned for the birth, because it became necessary for an emergency C-Section. They are so thankful for Louis, a gift from the Lord!

Whilst in Germany, Philip and Natalie, attend their church camp and were part of a weeklong outreach called Playstage. They are trying to see as many friends and supporters as possible, during their home assignment, spending time with their family and church. Pray for them to be a blessing.

Now, they are adjusting to the new addition to their family and to family life! There is also lots of paperwork to complete. They having speaking engagements even in other European countries. There are numerous doctor and dental appointments to attend. In addition, Philip is studying for his German driver’s license and learning more of the German language.

Philip and Natalie’s co-workers the Stanleys are expecting a baby as well. They plan to return to England for the delivery of their baby in November; the same month that Philip and Natalie are hoping to go back to PNG.

As a team, they still need a third unit to be able to move to certain tribal locations, for example the Gulf Province. Pray that they would have wisdom in this area.

Continue to pray for the teaching that Steve Stanley is doing in the two schools. There are three weeks left until the end of classes and in this time, they will be covering the life, death and resurrection of Jesus.