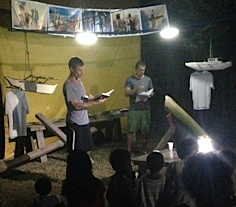 As hard as this starting and stopping is, the team trust the Lord in His timing. It is encouraging that the people really seem to be enjoying the teaching. They are not leaving because they don’t want to attend; they just have to carry on with the necessities of life. When Donovan and Charla Epp visit with the people they ask about the teaching and want to hear more of the story. They are so thankful that the Lord continues to give the Agta the desire to hear Truth.

As Char thinks about week six’s teaching, the lesson that sticks out for her most is the night they taught on the Ten Commandments. Once again they pulled out the two different T-shirts. The pure white one representing God and His holiness and then man’s shirt, which is getting dirtier and dirtier, representing our sin problem. This night the missionaries filled ten syringes with different coloured paint. Char put on the shirt along with some goggles. As Don and John talked about each commandment, they picked volunteers from the crowd to spray her with paint representing man’s sin. It was a messy but very visual illustration!
Last week Char’s favourite lesson was of the twelve spies going into Canaan. It was really interesting how much the people liked this lesson. They seemed to really cheer on Joshua and Caleb, even though it was two against ten. Maybe they connected because of how they feel in society as a people group. They are the underdogs, the few among many. They stick out. They were so happy that Joshua and Caleb saw God as the conqueror and the problems as small and that they chose to trust in God to give them the land. Pray that the Agta themselves begin to see God’s strength and power over all other spirits. That they see that God is the same today and that He is faithful and mighty to save.
The team were able to teach on four nights. Monday the people were still up in their fields. Tuesday was also quiet in the village, not many were back. As Don and Char visited them up in the fields they asked if they would like the missionaries to teach where they were now living. They communicated that they really enjoyed meeting all together under Don and Char’s house and as soon as the smaller group fishing up river came back, they too would move back down. They were eating supper on Tuesday around 7pm when they heard people outside. People were gathering and wanted teaching! It was the family group that was in the fields that they had just visited with earlier. They had decided to come down for teaching after all. Don and Char asked if it wasn’t too late, if people wouldn’t already be sleeping, but they said no and went and gathered everyone together and so the team kept teaching! That night the verse 2 Tim 4:2 …’be ready in and out of season’ came to life as John and Don quickly got themselves together for the next lesson.

The missionaries have spent years studying the Agta culture, trying to understand them and their worldview. Hours are being spent on the lessons discussing how to communicate to their heart and culture. Yet on some days the team feel like they have so far to go, to really meet them where they are at, really ‘getting’ them. The Agta are truly amazing people, they know the jungle and how to survive. It’s incredible how they come alive up there, where they are most comfortable and can truly be themselves; just them and the jungle that God has provided for them. Down in the village they’ve built more permanent dwellings, interact with other lowlanders and have learned how to live a little more ‘settled’. Yet even as they’ve adapted to a more structured community… they are still semi nomadic at heart.

For Don and Char it is a privilege to introduce them to a God who created them as a people, and enjoys who they are. That they can take pride in their jungle survival skills, and enjoyment of living semi-nomadic, because the God of the world made them that way and takes delight in who they are.

The missionaries have now finished the Old Testament lessons. Next week they will introduce them to Jesus… the promised. Most, if not all the Agta are familiar with Jesus, but pray with the team that their eyes will be open to who He really is. The long awaited Saviour who came to US!