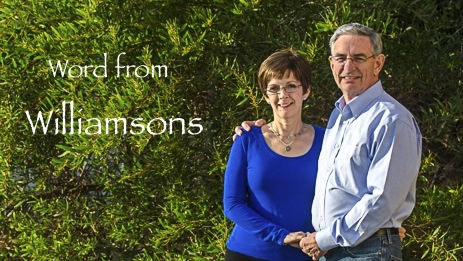 Connecting again with their many mission partners is always a special treat for Barrie and Cherri and this conference was no exception. Delegates from 18 countries made up from 15 different nationalities attended. Many thought-provoking presentations and a series of formal and informal meeting times meant a pretty intense schedule.

Though Cherri’s broken toe caused her some pain and discomfort especially on the long flights, she did pretty well. It was much easier for her to ride a “tuk-tuk” than to walk with a boot-cast.

Six weeks after the fracture, Cherri had another x-ray because of on-going symptoms. That x-ray showed “no evidence of any healing!” Cherri continues to wear the boot-cast when on her feet. She’ll have another x-ray in two weeks. Symptoms remain the same. Please pray that the fracture will start healing.

February saw them hunting for a new home. They had hoped to find somewhere large enough to accommodate Cherri’s father as well and close enough to the facility where Cherri’s mum stays. That plan did not work out but plan B did; they found an apartment just five minutes from dad.

Barrie and Cherri hope to move into the apartment next week. Their church has been SO gracious in allowing them to stay in their missionary apartments longer than is normal. The new place is small but much closer to Cherri’s father, which is their main concern. Many of their wonderful friends have been donating furnishings to get them started so they are being showered with blessings. The only drawback is that they have not been given a firm move-in date yet and they must move at the end of this month. Please pray they can move ASAP!

In April, Barrie plans to visit the Philippines to meet with several teams there. Pray for safety, good health, wisdom and that he and the team can be a blessing. Pray for Cherri as she stays behind. They always appreciate your prayers for her parents’ health, and for their kids David and Jodi and their families.