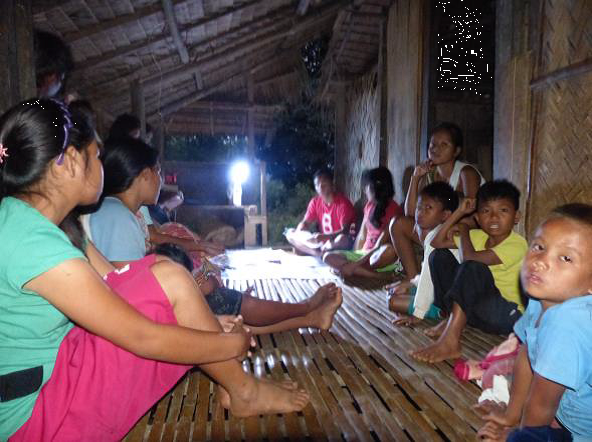 Elise asks for intense prayer for the Palawanos. In the areas where the missionaries work it seems the enemy is doing his best to intimidate both the Bible teachers and the communities.
Pray for healing of relationships in the village where Dave Ward is teaching the evangelistic phase of the Bible lessons. A murder last year shook the village, and both the victim and the murderer were part of the group listening to the teaching.
Pray that God would turn these situations around for His glory.
A young woman, married to an old man, is both deaf and unable to speak. She has four small children. She has had epileptic episodes in the past, and is very unwell and her family are fearful of harm.
God has been healing the heart of an eighteen year old student in the school who was rejected by her parents at birth. She is a joyful believer in Christ, and is assisting the Bible teachers in the outreaches. One day recently, she was found moaning and semi-conscious, and soon slipped into unconsciousness. The believers prayed for her and took her to the small clinic, she was soon released, but the community was frightened by the event.
Also a family came from an outlying village with a girl who appears to be under demonic attack.
Elise’s co-workers’ prayed for her, but are encouraging the whole family to move closer so that they can listen to the Word of God.
Elise is thankful for prayer for the man that took over teaching at one of the outreaches.
He has been having terrifying dreams. Pray he will stand firm in the face of temptation and fear, and remain committed and faithful as he is just a few lessons away from teaching about the death, burial and resurrection of Christ to this little group. Pray that the group will be consistent in gathering to listen.
Once Elise finishes the teaching in the UK, she looks forward to being back with the team and the Palawano people.