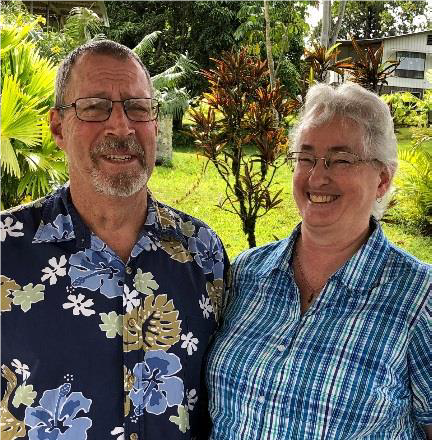 Jim and Judy Burdett are back in the USA for home assignment.

For the first time in their history, the Dom church in their current location, gave them a farewell. They thoughtfully held it on the Monday before their departure on the Wednesday, as they knew that Jim and Judy would be busy the day before. They had put together a whole programme and provided their own power and light. Usually they are seeking their help.

Different ones stood up and shared how their ministry has impacted them. It was very moving for Jim and Judy to be reminded that their labour and that of their co-workers was not in vain and that your prayers and support have produced such fruit. So many shared how they had not previously been able to read, but had learnt by taking part in the literacy programme and were now able to read God’s Word for themselves. They asked Jim and Judy to stand and then they all, including outsiders of their church hugged them or shook hands and put some money or a gift in a bag. In Papua New Guinea, Jim and Judy live amongst the poorest of the poor, but they gave to them. They believe that their actions were another sign of how God’s Word in their language has changed their lives.

After leaving PNG, they spent three weeks in Australia and New Zealand visiting old friends including two former co-workers in the Dom. Everyone was so gracious to them. Some of them they had not seen in many, many years. What a blessing!

Since arriving in the USA, they have been busy getting settled. Some things have changed in the four years since their last home assignment but it mostly all seems the same. Coming from a PNG perspective gives them much to take in and wonder at regarding life in America.

They are thankful to their home church for their mission apartments; to them it is like coming home.

They will be moving around, spending time with family and friends as well as sharing in meetings about the difference faithful prayers and support are making in Papua New Guinea. One project for their return will be replacing the battery bank for their solar system and building a little house at their original location to train literacy teachers and access how that church is doing.

Continue to pray for the Dom believers and their co-workers Gerolf and Mailis Wuest and family who are on home assignment.