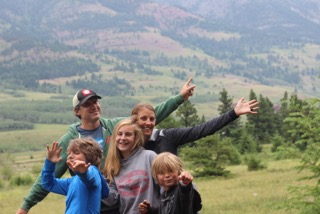 After getting settled back in Manila, working through business, getting over jet lag and seeing friends, Don, Char and the family worked their way up to Tuguegarao City, their supply base in the North. In Tuguegarao they continued to work through business, like renewing drivers licences etc. Then it was off to the tribe via helicopter. They arrived in the tribe with warm greetings from their co-workers and friends.
Don and Char’s house and yard were in great shape, better than when they left. It looked very inviting with the lawn cut and the house clean with windows open, and a fresh coat of white paint in some areas. Having someone in the village with a key to the house and paying them to work on the house and clean the yard, had been so helpful. Not only did it allow for a quick settling in, but it also helped insure the house was not being overtaken by rodents in their absence!
The kids went swimming in the ocean within the first hour with Don and Char’s co-workers and other tribal friends. When they came back to the house, Zane complained of a slight headache. However, that first evening Zane went down with a fever after not even four hours in the tribe! In the morning Zane started to show spots in his mouth, on his feet and on his hands. Zane must have contracted ‘Hand, foot and mouth disease’ in Tuguegarao.
Although the kids were quarantined for almost two weeks, Don and Char decided to venture out in the community during the second week. Don is back at work with his language helper who is doing well and was eager to get back to work with him, studying the Bible and telling stories. This language helper’s boldness remains strong as he continues to trust the Word of God regarding the power of God over the spirits, and the control of God over the weather.
Now, after getting school finished off in the morning the kids are gone: swimming, fishing, basketball, sling shots, tag and volleyball; they are making up for lost time and enjoying every moment of it! They have picked up with friends from where they left off and are very happy!
Continue to pray for the missionary team as they seek to reach the Agta with the Gospel.