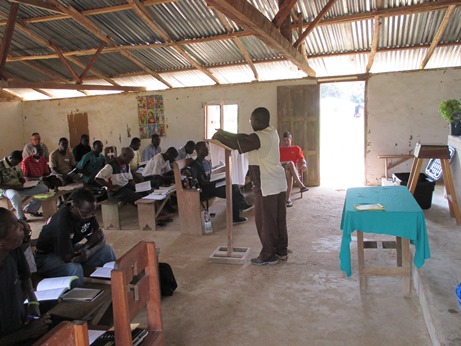 The team did three projects: insulating below the house, screening in the deck and hauling and splitting tons of wood. They have already felt the difference of the insulation. Robert is now working on the trim for the deck’s screening and making a door. They thank the Lord so much for this gracious and generous provision and look forward to their return to work further on the mission premises this summer.
Classes have gone well this term with the smallest class ever. Please pray that they will continue well with curriculum development.
Robert is back into full swing on campus after his trip.
On the Liberia Trip January 13th – February 14th Robert flew from Springfield to Atlanta where he met up with team mates Ken and Marty and from there to Paris where they met up with team mates Hank and Pete and then flew on to Monrovia.
They were very pleased that Samaritan’s Purse had offered to fly them to the south of the country, which turned out to be an hour and half journey instead of two days on the road with a four day recovery! They thank the Lord for that provision.
George Lott met them with a pickup truck and taxi and it was really special for Robert to see George’s wife Lucy and their children too. They had actually built a little house alongside their own so they could put up visitors.
The main purpose of the trip was twofold, one to work on the former dorm at the main base and secondly for Marty and George to take pastors through teaching, which they expected to take two weeks, but due to the farming season they increased the teaching times to complete this in a week. They had the privilege of teaching twenty-four pastors and one lady. It was so encouraging for the team to see these pastors get hold of God’s Word and to be so thrilled with how it was impacting their lives. In fact some were saved! It was emphasised very strongly that they do not keep it to themselves, but are to pass it on. Please pray they do so!
One highlight for Robert was when a young man came up to him and asked him if he used to work in Liberia in the 1980’s. It turned out that Robert knew his father. This was a huge surprise and encouragement as he is one of the local pastors there and his wife does a medical clinic.
The rest of the team worked at the dorm, after first rebuilding a wooden road bridge with a lot of help from the local people. Some walls had already fallen down so they took one side away and make a big porch area, which will be used for teaching. They still had to rebuild some of the walls, but this went well.
Robert made some temporary window and door frames to stop the walls from cracking but the wood was very hard, wet and heavy. They had to work on the porch areas, dig a new septic hole and put a cement cover on. They cleared out the well and found eight foot of water in the bottom, which was very encouraging. Pray it will work again with a new pump that’s needed.
Samaritan’s Purse flew them back to Monrovia where they were able to look for supplies to do the roof. Also while they were at the guest house they met a young man from Mauritania, Abram who is now a believer and was put in prison there for his faith, but managed to escape. He had been in Liberia a few years, but would love to return to his homeland to be a witness for our Lord there. Pray for God’s direction in his life. Also pray for a man who is from El Salvador who is working in Liberia with the UN teaching the Liberian police force. It was a real blessing to meet him as he was full of joy in the Lord. Pray for safety for him as he does his job around Monrovia. He will return home in May.
On the teams return home an incoming ice storm in the USA caused travelling delays but God provided.
Robert counts it a privilege to be able to go and see what the Lord is doing in Liberia. Pray for the country, for George and Lucy and the Lott family, the future work to be done, both physically on the building, which will be used in the future for the teaching, and spiritual input in the lives of the pastors.
Robert and Rosemarie never thought either of them would ever see Liberia again, what a blessing from the Lord! It was a hard time for Rosemarie at home, but she was as much a part of this as Robert.