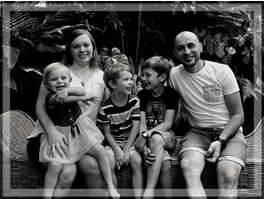 While Boris and Valentina Bergen were preparing for a cosy holiday at home as a family over Christmas, Typhoon RAI hit the northeast coast of the island where they are living in the Philippines. Although they did not feel much of its effect, it quickly became clear that others had it much worse.

Just a few days later, God put it on their hearts to help those in need during the holidays.

Initially not knowing how or exactly who, as always, at exactly the right time God made it plain to them.

So on December 24th they bought relief supplies, packed them on December 26th and drove with them to where they were needed on December 27th. It was a very intense time.

They saw a lot of destruction and heard from many people who had lost their homes. They visited many different churches in the affected area and encouraged their brothers and sisters in the Lord.

It was a real blessing for them to be able to gift these brothers and sisters with God’s love and care.

This was not how Boris and Valentina imagined the end of 2021. But they could not have asked for better.

Boris, Valentina with their children Benaja, Phil Noah and Zea were blessed with a few days by the sea before getting back to business.

Now they are back home, the new year is full steam ahead for Boris and Valentina again.

They attend a seminar on how the new missionaries will learn language. Although they went through this programme themselves nine years ago, a lot has changed since then. It is different going through the programme yourself to accompanying people through it. Now they have the opportunity to get to experience it from the “coaching” side, ready for the first missionary family, who should arrive in the Philippines in the next week. Please pray for this family, who, after saying goodbyes, will be travelling with their two little girls aged three and one, on the long journey to a country that is still unknown to them.

The applications for the special permit are also in progress for the next families in order for them to arrive in March/April, together with their home school helpers. Pray for the timely approval of these applications.