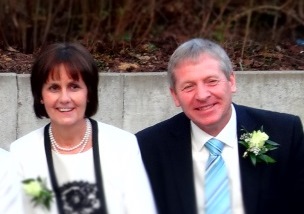 In January Norman and their son Caleb with twenty others went to Kenya for a fortnight to build a classroom for children with special needs. In February Norman and some other men prepared ten cabins for a camp site for a missionary friend in Greece who desires to set up a Christian camp ministry there. These along with a digger were sent over in a container at the beginning of March.
March was an exciting month for them as their son Matthew flew home from Australia for three weeks and together they flew to Germany for their son Andrew and Joanna’s wedding. The new Mr & Mrs McCready left for their honeymoon and Norman and Angela went home to prepare for their N. Ireland wedding celebration. They have moved into part of granda’s house and Joanna is busy making it home. They plan to live there while Andrew finishes his NVQ 3 catering course and then their desire is to go into mission training.
Now Norman and Angela are preparing for the summer Summit teams. They would value your prayers for that and for Norman who has a lot on his plate over the next few months. On Easter Monday he and two other men flew to Thessalonica to help build a children’s camp site. Young people in Greece have very little fellowship so this will be a place where they can recharge their batteries and spend quality time with the Lord and other believers. The men worked round the clock to get as much done as possible in the ten days they were there. Norman flew back to London and took a train up to Angela and the candidates at the NTM headquarters, North Cotes, to meet for the Summit orientation weekend.
Twenty young people have been accepted to go out with Norman and Angela this summer to the Philippines, Brazil and PNG and Norman and Angela are excited to see what God is going to do in their lives in the future. They were delighted to hear just recently that a couple who went on a team with them way back in 2003 have started full time aviation training in Australia to be missionary pilots! That is what Summit is all about; exposing and challenging people to missions. Angela is busy communicating with the missionaries on the field to finalise internal flights, visas, itineraries etc. As usual there are hiccups along the way to add a few more grey hairs and improve their prayer life!
Before the summer teams Norman has one more trip to do. He is going to Ethiopia with some other men to do a project at a Christian school. He leaves for Addis Ababa this week and returns at the end of May.
On the 7th July they both fly to the Philippines with their first team. They will be helping build a new house for a family moving into a tribal work in North Luzon. They return on the 26th July and then on the 6th August Norman and Angela will fly with their second team to Boa Vista Romaira in Brazil. They return on the 27th August. Caleb is one of their Brazil team members.
Norman and Angela would appreciate your prayers for all their travels in the air and on land. Pray too for wisdom and discernment leading the teams; for team unity, good health; and for strength and stamina to do the work and keep one step ahead of the team! They are praying that God will lead some of these young folk into tribal missions. There are still so many language groups that have yet to hear the Gospel for the first time.
Another prayer request is for their daughter Rebekah. She is looking into different mission societies. Please pray that the right doors will open for her and she will know for sure when and where the Lord would have her to go.