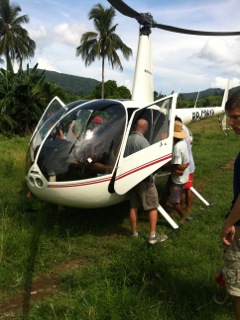 Donovan and Charla Epp share that a few weeks ago an older man in the village was overwhelmed with gratitude for the work of the support team in Luzon. For years, Robert has known the missionaries and has been a part of looking after the airstrip and has seen many emergencies where the helicopter has flown in to take a patient out to hospital, but this time Robert was on the receiving end. Robert saw his wife have a stroke during the night and Charla was called to Robert’s house, to see if there was any way they could help. It was clear that what looked like multiple seizures was far beyond what they could help with. By morning, the family was exhausted, wondering what they could do to help.
A quick meeting between co-workers was held and then they called for an emergency flight. This is where the story became an incredible tool for the Lord.
The family was grateful for the R44 helicopter to be rescuing them from a hopeless eight hour boat journey on the ocean and four hour bus trip, only taking twenty five minutes to be at a place to get some help.
When the helicopter landed in Dave, their supply buyer, now ‘ambulance driver’ was ready to take the family straight to emergency at a rural hospital. The family got to emergency in record time, due to the help of our NTM Luzon support staff; Filipino workers at our base, continued to stay involved with the family, checking up on them and seeing how they could help. They were translating for the support staff and keeping Donovan and Charla informed by email.
It was discovered very soon that the lady in fact had a stroke and there was nothing the hospital could do.
It was at this point where Robert says everything just came together. A doctor mentioned how if they had air, they could take her back to the village where she would die. But they would need air, and a nurse to help them get home, as the hospital would have to be sure that the lady would be alive until she arrived there. Again, it looked hopeless. What happened at this moment was that Dave showed up with than air tank that Brian the helicopter pilot had in storage since the shutting down of the SIL base, and they were ready to whisk this family back to the comfort of home in the helicopter. “Even the air tank was nicer than anything in the hospital.” Robert said. The doctor friend of Robert checked his wife’s pulse, saying it was there just so they could dismiss the body through the front of the hospital, instead of going through the morgue.
Dave was ready to pay for the extra expenses that Robert could not afford from his budget which Donovan and Charla had asked Dave to do from their ministry fund. Without paying the bill, there was no way they would be leaving the hospital. Robert says he would still be there.
As they left the hospital through the front door, Robert was grateful to be on his way to see his family. Robert says, “My wife was honoured through all the helicopter rides and efforts to help her. She was treated very special.”” Brian and the Dave had everything ready to come back into the village, as fast as possible, helicopter and cargo. In between all this, Dave had time to organise an order of fresh fruit for Donovan and Charla! AMAZING!
As the chopper landed the mood quickly changed from hope, to mourning.
This team went above and beyond anything that could have been expected, far above what is ’normal’ and gave of themselves to help this family who is full of gratitude. It is not for gratitude in a situation where everything worked out the way we hoped, but gratitude for someone being there for them at their lowest, most desperate time of need. That is the team in Northern Luzon!
It is not only these support staff and pilots that keep Donovan and Charla going, but all of their faithful supporters back home. Without all this in place, a family like Robert’s would not be touched with the love of Christ in such a powerful way. Pray with them that the Lord would use this situation to soften the hearts of Robert and his family, and cause them to search for the truth. God is doing great things, HIS hand is at work.