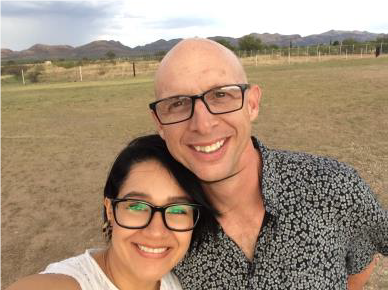 Stephen and Helena Brown with Ashley, Amy, and Grace serve at the Bible and Missionary training Centre in Colombia.

The end of last term was busy, but the Lord gave strength and wisdom. Stephen enjoyed the classes and leading the student work/maintenance programme.

A couple who are fourth year students went on a six-week field trip to the Cubeo tribe in May. Upon their return they shared that it was scary to get into a tippy dugout canoe with their baby driven by a female missionary (the river was in flood stage). They were told not to tip the canoe because then they would have to swim to shore; but the Lord took care of them, and the missionary did a good job at steering the canoe. Family members had advised them not to take their baby to the jungle as she might get sick. They were careful to minimise the dangers and their daughter fitted right in and opened doors for them to make friends with a family who were not open to the missionaries. God was in control. Whilst in the tribe they were reminded of the need to learn and teach in the heart language of the people. They realised that planting a church in another culture is very difficult; but were encouraged to see how God was using the two single female missionaries to befriend the people, learn their language, and work with a team of tribal translators to translate the Word of God. Pray for this student couple as they finish their training in November and wish to plant a church amongst one of the tribes of Colombia.