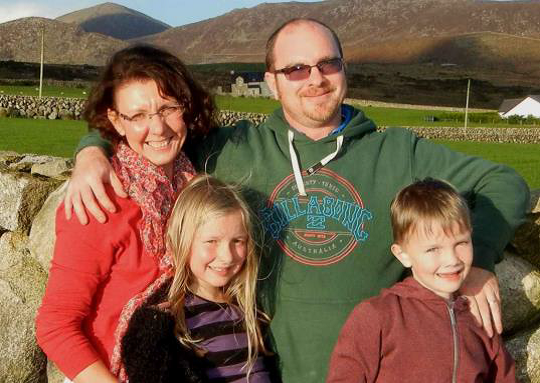 After fighting a brain tumour for several years Nelli’s nephew David was told by the doctors that they couldn’t do anymore for him.  They said that he had only one to two months to live because the brain tumour had expanded and grown even during the last strong chemotherapy treatment. David was released from hospital without any further treatment. However, to everyone’s surprise and the doctor’s confusion, David’s condition remained the same.  What they expected didn’t happen. So, because of this, David went to get his brain scanned again. The doctors couldn’t understand or explain it, but the tumour is completely gone! Even the doctors said that this is a miracle. Yes, God still works miracles. He is supreme and sovereign.  He’s all powerful and is still in control! Praise God with them for answering prayer.

There has been some movement concerning Andrew and Nelli’s visa situation, but they still have a long way to go. Pray for their patience, which is greatly tested and for the migration agent in Australia, who is currently processing the sponsorship/nomination status for Crossview Australia and will process their visas.  This is a notoriously long drawn out process, so they would appreciate your prayers as they wait on the Lord.

Andrew does labouring work three days a week for a builder in the interim period while waiting for Australian visas.

Nelli continues to have great ministry opportunities with several women in Northern Ireland.

Andrew and Nelli are also in the process of getting their personal items from their house in the tribe in PNG to the HQ in Goroka, ready to be shipped onwards. Pray for their co-workers who are working to get this done and that everything will get done smoothly.

Even though the fledgling church in Wahgi, PNG is going through some struggles and is battling temptation and old ways of thinking that have been part of their culture for centuries, real growth and a hunger for God’s word is evident at the same time. Praise God! Recently some of the believers discussed the need to take the good news of Jesus to the people who live up and down the nearby valley. Rejoice with them that God who began the good work within them will be faithful to continue his work until the day of Christ’s return (Phil 1:6).

Time has been set aside each Monday by three men in the Wahgi church to discuss this ministry and the work that needs to be done. Pray for these key men as potentially they will lead the church in the future.

Pray for the ladies interested in becoming literacy teachers and for the literacy course that has started.