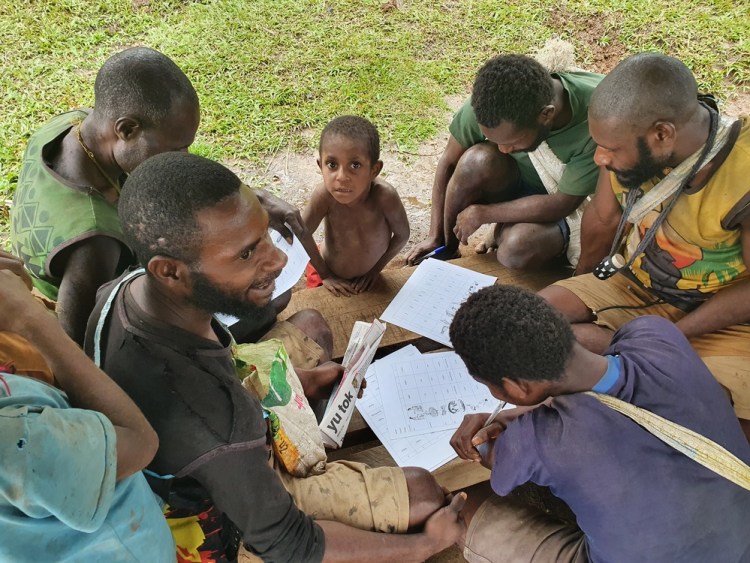 Steve and Gerdine Stanley and family are feeling much better this week, and with their co-workers, the Stous family, returning they are not on their own any more.

The orthography survey project seems to have run out of steam. However the results are pretty clear. The differences between the two dialects, Imengis and Matat means they need to force one dialect to accept something they would not choose, or they need two separate alphabets.

So Steve decided to look at it from a different angle. He has been working on writing little 100-word stories to practise putting sentences together. He then realised that the grammar is pretty much the same. There are different word choices in places, but the general structure of how verbs conjugate is the same, a

Looking at the stories he has done so far it looks like it should be possible to create an Imengis – Matat translator. He can programme a script to go word by word and phrase by phrase, look it up in a dictionary and then replace it with the Matat equivalent.

They are not planning on learning to speak with a Matat dialect (learning both dialects and keeping them separate in their minds would be very confusing). They will speak with just an Imengis dialect, which is understood just fine by Matat speakers. When it comes to written materials though, they have a few choices:

Produce written materials for both dialects?

Produce written materials that are a mix of both?

Just to throw another spanner in the works, within the Imengis dialect each village has their own pronunciation and spelling. Whatever they choose they are unable to keep everyone happy. Hopefully, time and advice from literacy consultants will bring a bit of clarity!

Steve says, “It’s fascinating as we delve into this little PNG language though. Since it doesn’t have a written form there is no ‘official’ Kovol language; every family has their own version of it and everyone handles the ambiguity just fine. When we start producing written materials we in effect create a standard Kovol language, that’s an intimidating idea!”